Lung cancer is the second most frequently diagnosed cancer in the United States, with an estimated 234,030 new cases projected for 2018.3 Non–small-cell lung cancer (NSCLC) accounts for approximately 85% of all cases of lung cancer.4

On April 17, 2017, the US Food and Drug Administration (FDA) granted accelerated approval to atezoliz­umab (Tecentriq; Genentech), a monoclonal antibody intravenous (IV) inhibitor of programmed-cell death ligand-1 (PD-L1), as detected by the FDA-approved test, as a front-line treatment for patients with locally advanced or metastatic urothelial carcinoma who are not eligible for cisplatin chemotherapy.5

“It is encouraging to see continued progress in the treatment of advanced bladder cancer, which until last year had not seen any major advancements in more than 30 years,”5 said Andrea Maddox Smith, Chief Executive Officer, Bladder Cancer Advocacy Network. “We are excited that TECENTRIQ is now a treatment option for people with advanced bladder cancer who are unable to receive a cisplatin-based chemotherapy as an initial treatment.”5

Atezolizumab initially received accelerated approval in May 2016 for the treatment of locally advanced or metastatic urothelial carcinoma that progressed during or after platinum-containing chemotherapy or within 12 months of neoadjuvant or adjuvant platinum-containing chemotherapy.6,7 This was the first FDA approval of a PD-L1 inhibitor for any malignancy.6 The 2 approvals for urothelial carcinoma are contingent on results from ongoing phase 3 clinical trials.8

In October 2016, the FDA approved atezolizumab for the treatment of metastatic NSCLC that progressed during or after platinum-containing chemotherapy.9 Patients with NSCLC and EGFR or ALK mutations should have disease progression during FDA-approved treatment for these mutations before receiving atezolizumab.9

PD-L1 on tumor cells and tumor-infiltrating immune cells contributes to the inhibition of the body’s antitumor immune response in the tumor microenvironment. The binding of PD-L1 to PD-1 and B7.1 receptors on T-cells and antigen-presenting cells results in cytotoxic T-cell activity, T-cell proliferation, and the suppression of cytokine production.8

Atezolizumab is a monoclonal antibody that, when bound to PD-L1, blocks its interactions with PD-1 and B7.1 receptors and releases PD-L1– and PD-1–mediated inhibition of the body’s immune response.8

The recommended dosage of atezolizumab is 1200 mg, administered once daily via IV infusion for 60 minutes every 3 weeks until disease progression or until unacceptable toxicity.8 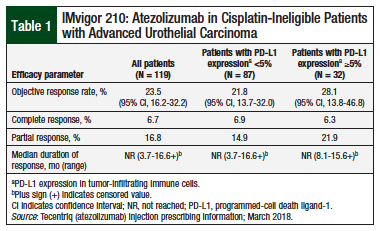 POPLAR and OAK Studies in NSCLC

The efficacy of atezolizumab in patients with NSCLC was established in 2 multicenter, international, randomized, open-label clinical trials in patients with metastatic disease that progressed during or after a platinum-containing regimen.11,12 The POPLAR study enrolled 287 patients.11 The OAK study included 1225 patients, with a primary analysis population of 850 patients with metastatic NSCLC.12 All patients were stratified by PD-L1 expression status, number of previous chemotherapy regimens, and histology.11,12 In both studies, the primary end point was OS. Other efficacy measures in the POPLAR study were ORR and duration of response.8 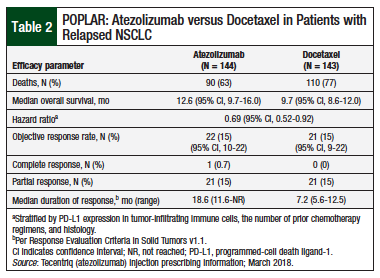 The safety of atezolizumab in patients with metastatic NSCLC, regardless of PD-L1 expression, was based on data from 142 patients. The most common (≥20%) adverse events with atezolizumab included fatigue (46%), decreased appetite (35%), dyspnea (32%), cough (30%), nausea (22%), musculoskeletal pain (22%), and constipation (20%).8 The most common (≥2%) grade 3 or 4 adverse events included dyspnea, pneumonia, hypoxia, hyponatremia, fatigue, anemia, musculoskeletal pain, increase in aspartate aminotransferase levels, increase in ALT levels, dysphagia, and arthralgia.8 Overall, 4% of patients discontinued atezolizumab therapy because of adverse reactions, and treatment interruption was required in 24% of patients.8

Atezolizumab has no contraindications.8

Atezolizumab can cause fetal harm. Women of reproductive age should use effective contraception during atezolizumab therapy and for 5 months after the last dose. Female fertility may be compromised with atezoliz­umab therapy.8

Women should not breastfeed while using atezolizu­mab and for at least 5 months after the last dose.8

Patients using atezolizumab should be assessed for the signs and symptoms of several immune-mediated conditions, including pneumonitis, interstitial lung disease, hepatitis, diarrhea, colitis, pancreatitis, myasthenic syndrome/myasthenia gravis, Guillain-Barré, or meningoencephalitis. Treatment should be withheld or permanently discontinued with these conditions.8

Atezolizumab should be withheld for moderate ocular inflammatory toxicity and permanently discontinued with severe reaction.8

Infection was observed in 38.4% of patients who received atezolizumab across clinical trials. Atezolizumab should be withheld for severe infections.8

Infusion reactions were reported in 1.3% of patients who received atezolizumab in clinical trials.8

The new indication for atezolizumab, a PD-L1 inhibitor, as first-line treatment for patients with locally advanced or metastatic urothelial carcinoma who are not eligible for cisplatin-containing chemotherapy, provides a new immunotherapy option for patients, regardless of PD-L1 expression. Atezolizumab is also approved for the treatment of patients with advanced or metastatic urothelial carcinoma that progressed during or after platinum-containing chemotherapy and those with metastatic NSCLC.