Urothelial carcinoma is the primary subtype of bladder cancer, which is the sixth most common cancer in the United States.1,2 More than 79,000 cases of bladder cancer were estimated to be diagnosed, and nearly 17,000 people to die from this disease in 2017.3

The majority of urothelial carcinoma diagnoses occur in Caucasian men.3 It is typically detected after hematuria, urination frequency or urgency, or pain during urination.3

The prognosis associated with urothelial carcinoma is favorable for patients with localized disease: 77% of patients are alive at 5 years.1 However, the 5-year survival rate decreases to 5% for patients with distant disease,1 despite surgery, chemotherapy, and radiation.

Today, these standard treatment options for advanced urothelial carcinoma have expanded. After a dearth of substantive progress in the pharmaceutical management of this tumor type, the US Food and Drug Administration (FDA) approved several programmed-cell death ligand-1 (PD-L1) inhibitors for the treatment of patients with urothelial carcinoma in 2016 and 2017.4

On May 1, 2017, the FDA granted accelerated approval to durvalumab (Imfinzi; AstraZeneca), an intravenous (IV) PD-L1 inhibitor, for the treatment of patients with locally advanced or metastatic urothelial carcinoma whose disease progressed during or after platinum-containing chemotherapy, or within 12 months of neoadjuvant or adjuvant treatment with platinum-containing chemotherapy.5

On the same day, the FDA also approved a complementary diagnostic assay for PD-L1—the VENTANA PD-L1 (SP263) Assay—which detects PD-L1 protein expression levels on the tumor-infiltrating immune cells to help oncologists determine which patients may benefit the most from durvalumab therapy.5

“The usual course of treatment for patients with advanced bladder cancer begins with a standard platinum-containing chemotherapy. Patients who have disease progression during or following chemotherapy are left with few other treatment options. The approval of Imfinzi to treat this population of select patients signifies hope for those who are currently suffering, or may find themselves with limited options in the future,” said Nicholas J. Vogelzang, MD, Clinical Professor, University of Nevada School of Medicine.6

On February 16, 2018, the FDA approved durvalumab for the treatment of patients with unresectable stage III non–small-cell lung cancer whose tumor has not progressed after receiving chemoradiation.7 The FDA granted durvalumab priority review and breakthrough therapy designation for this indication on October 17, 2017.

PD-L1 expression on tumor cells and tumor-associated immune cells in the tumor microenvironment can be induced by inflammatory signals and cytokines. PD-L1 blocks T-cell function and activation by interacting with PD-1 and CD80 (B7.1), and reduces cytotoxic T-cell activity, proliferation, and cytokine production.8

Durvalumab is a human immunoglobulin G1 kappa monoclonal antibody that blocks the interaction of PD-L1 with PD-1 and CD80 (B7.1) to release the inhibition of immune responses, without inducing antibody-dependent cell-mediated cytotoxicity.8

The recommended dose and schedule for durvalumab is 10 mg/kg via IV infusion for 60 minutes every 2 weeks until disease progression or until unacceptable toxicity. Dose reductions are not recommended.8

The efficacy of durvalumab was evaluated in Study 1108, the urothelial carcinoma cohort of a multicenter, multicohort, open-label, phase 1/2 clinical trial that involved 191 patients with locally advanced or metastatic urothelial cancer that progressed during or after a platinum-based regimen, including patients whose disease progressed within 12 months of receiving neoad­juvant or adjuvant therapy.9 The patients received durvalumab therapy for at least 13 weeks before the data cutoff date.9

Durvalumab was administered at a dose of 10 mg/kg via IV infusion every 2 weeks for up to 12 months or until unacceptable toxicity or disease progression. The primary efficacy outcome measures were confirmed objective response rate (ORR) according to Response Evaluation Criteria in Solid Tumors, version 1.1, as assessed by a blinded independent central review, and the duration of response.9

The majority of patients (aged 34-88 years) were male (71%) and Caucasian (71%), with metastasis to the bone, liver, or lung (approximately 92%).9 Overall, approximately 33% of patients had received at least 2 previous lines of systemic therapy for urothelial carcinoma that included cisplatin and carboplatin for approximately 69% and for 29% of patients, respectively.9 Approximately 8% of patients who were enrolled in Study 1108 had disease progression after receiving platinum-containing neoadjuvant or adjuvant chemotherapy as their only previous therapy.9 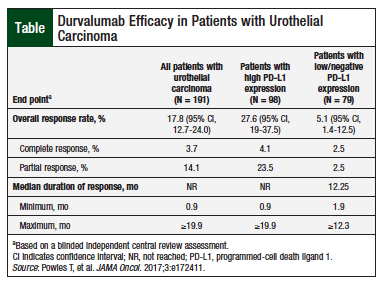 A total of 2 (1%) patients who received durvalumab died, one as a result of pneumonitis and the other of immune-mediated hepatitis.9

Durvalumab has no contraindications.9

Nursing women should be advised not to breastfeed during treatment with durvalumab and for at least 3 months after the last dose.8

Although there were no significant differences in the efficacy and safety of durvalumab between patients aged ≥65 years and those aged ≥75 years in Study 1108, these results should be viewed with caution because of the small number of patients.8,9

Durvalumab can cause immune-mediated reactions, including pneumonitis, hepatitis, colitis, and nephritis, including fatal cases. Patients should be assessed before starting durvalumab therapy and be monitored periodically during treatment.8

Severe or life-threatening infusion-related reactions can occur with durvalumab.8 Severe infections have been reported in patients who received durvalumab.8

Women of childbearing potential should use effective contraception during treatment with durvalumab and for at least 3 months after the last dose.8

To manage adverse reactions, durvalumab should be withheld or discontinued.8

Durvalumab, a PD-L1 inhibitor, has demonstrated safety and efficacy in patients who previously received treatment for advanced urothelial carcinoma. Durvalu­mab is being evaluated as monotherapy and in combination with tremelimumab, a monoclonal antibody that targets human cytotoxic T lymphocyte–associated antigen 4, in the phase 3 DANUBE clinical trial.4,10 This study will enroll patients who require initial treatment for metastatic urothelial carcinoma, regardless of their eligibility for cisplatin-based chemotherapy.4,10