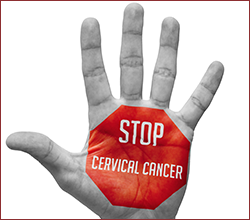 Cervical cancer is one of the 5 main cancer types that affects women’s reproductive organs, and occurs in approximately 12,000 women in the United States each year.1 Although it is very curable when found and treated early on, early-stage cervical cancer may not cause any noticeable signs or symptoms. In advanced stages, however, the disease may cause vaginal bleeding or discharge that is abnormal for the patient.1

According to the National Institutes of Health, cervical cancer was a major cause of death for American women of childbearing age as recently as the 1940s.3 However, the introduction of the Pap (Papanicolaou) smear in the 1950s led to a dramatic decline in the incidence of invasive cervical cancer.3 Of note, incidence and mortality rates for cervical cancer in the United States declined by >60% between 1955 and 1992.3

According to the Centers for Disease Control and Prevention, with regular screening tests and follow-ups, cervical cancer is the easiest gynecologic cancer to prevent.5 In addition to the Pap smear, which is recommended for all women aged 21 to 65 years, certain patients aged ≥30 years may choose to take an HPV test. If test results come back normal, the patient’s risk for cervical cancer in the next few years is very low, and her physician may tell her that she can wait as long as 5 years to have her next screening.