In 2 separate studies, apalutamide (Erleada) and enzalutamide (Xtandi) reduced the risk for metastasis and prolonged metastasis-­free survival in patients with nonmetastatic castrate-resistant prostate cancer (CRPC), according to the results of 2 clinical trials presented at the 2018 Genitourinary Cancers Symposium.

Although watchful waiting is an option for nonmetastatic CRPC, these 2 studies included men with a rapid prostate-specific antigen (PSA) doubling time (≤10 months) after surgery and/or radiation therapy; these men are at significantly increased risk for metastases and death. Until now, there has been no established therapy for men with nonmetastatic CRPC.

Based on these results, on February 14, 2018, the FDA approved apalu­tamide for the treatment of patients with nonmetastatic CRPC. This approval represents the first FDA approval based on a new end point—metastasis-free survival. 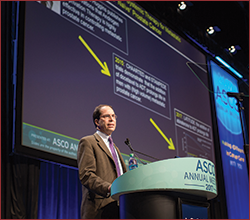 “These data demonstrate that the use of apalutamide prior to the development of metastases clearly benefited patients whose prostate cancer no longer responded to conventional hormonal therapy. It is exciting that there now exists such a well-tolerated agent for this group of high-risk patients for whom no approved therapies currently exist,” said SPARTAN lead investigator Eric Jay Small, MD, FASCO, Program Leader, Prostate Cancer Program, Helen Diller Family Comprehensive Cancer Center, University of California San Francisco, who presented the results.

SPARTAN enrolled 1207 men with nonmetastatic CRPC and a PSA doubling time of ≤10 months who were randomized in a 2:1 ratio to receive oral apalutamide or placebo added to ongoing ADT. Secondary therapies were allowed if the patient subsequently had metastases.

The median PSA doubling time was 4.5 months at baseline in both arms. Apalutamide reduced the risk for metastasis and death by 72% compared with placebo and significantly prolonged median metastasis-free survival by 2 years (40.5 months in the apalu­tamide group vs 16.2 months in the placebo group; P <.0001).

Apalutamide significantly improved the time to metastasis, progression-free survival, and symptom progression compared with placebo. All subgroups had a benefit favoring apalutamide versus placebo.

An improved survival trend was observed with apalutamide, but the survival data from the study are not yet mature.

Apalutamide was well-tolerated, and the quality-of-life scores were maintained when apalutamide was added to ADT. The most common adverse events observed in >20% of patients receiving apalutamide were fatigue, hypertension, rash, and diarrhea. Grade 3 or 4 hypertension occurred in 14.3% of the apalu­tamide group compared with 11.8% of the placebo group. 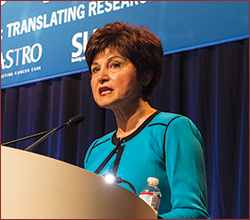 The median time to the use of a new antineoplastic therapy was significantly longer with enzalutamide than with placebo—39.6 months versus 17.7 months, respectively, for a 79% relative risk reduction (P <.0001). The time to PSA progression was also significantly longer with enzalutamide than with placebo—median, 37.2 months versus 3.9 months, respectively (P <.0001).

With a 22-month follow-up, the median overall survival was not yet reached in either study arm. There was a trend toward improved survival with enzalutamide, and the benefits of enzalutamide were consistent across all subgroups.

Adverse events of special interest (any grade) were higher in the enzalu­tamide group than in the placebo group (hypertension, 12% vs 5%, respectively; major cardiovascular disease, 5% vs 3%, respectively; and mental impairment, 5% vs 2%, respectively).

Invited discussant Philip Kantoff, MD, Chair, Department of Medicine, Memorial Sloan Kettering Cancer Center, New York City, commended the results of both trials, but reminded attendees that the gold standard would be an improvement in overall survival, which has not yet been shown.

“Telling asymptomatic patients to be treated carries a burden of proof where benefits outweigh the risk,” Dr Kantoff stated. “The results of both trials look promising, but we haven’t met the overall survival end point yet.”