The optimal dosing of pomalidomide in the treatment of multiple myeloma has not been established. Yale University investigators compared continuous and intermittent dosing regimens, and while the intermittent schedule was associated with more toxicity, they concluded that it is preferable, said Kartik Sehgal, MD, a postdoctoral fellow at Yale University School of Medicine, who reported the study at the 2013 American Society of Hematology Annual Meeting.

“Both continuous and intermittent dosing regimens of pomalidomide with dexamethasone have remarkable clinical activity in heavily pretreated, relapsed/refractory multiple myeloma patients,” Sehgal said. “Our objective was to determine the optimal dosing strategy for patients who relapse after treatment with standard regimens. These 2 dosing regimens have been evaluated in clinical trials but not compared head to head.”

The investigators found that while the intermittent regimen was associated with more grade 3/4 adverse events (AEs)—probably due to a higher dose of pomalidomide—it led to greater maximal reduction in tumor-associated immunoglobulin. The intermittent schedule, therefore, is being used in his clinic, Sehgal said.

Details of the Comparison

“The question is whether we should give a higher or lower dose of pomalidomide, but at the same time we want to decrease adverse events, so we give a higher dose but with 1 week off, which lessens side effects,” he said.

Outcomes With the 2 Regimens

The intermittent/higher-dose arm had numerically higher response rates, but the difference was not statistically significant. What was significant, however, was the difference in maximum reduction in disease, Sehgal reported (Table). 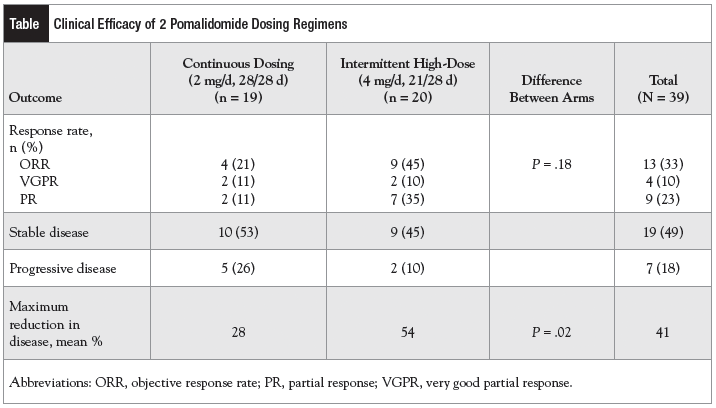 Median progression-free survival was similar, 4.4 months with continuous dosing and 5.1 months with intermittent dosing (P = .56). Median overall survival was the same, 17.7 months, in each arm.

“Despite a greater decrease in maximum reduction of disease with the intermittent dose, we did not see a difference in progression-free or overall survival,” he noted.

“We recommend going with the higher, intermittent dosing,” Sehgal told The Oncology Pharmacist. “This leads to a greater reduction in disease, and this probably gives the patient a better chance for a good outcome. Although there is the possibility of more grade 3 and 4 toxicity, in our experience the side effects are manageable.”