Recent Advances in the Treatment of Metastatic Melanoma 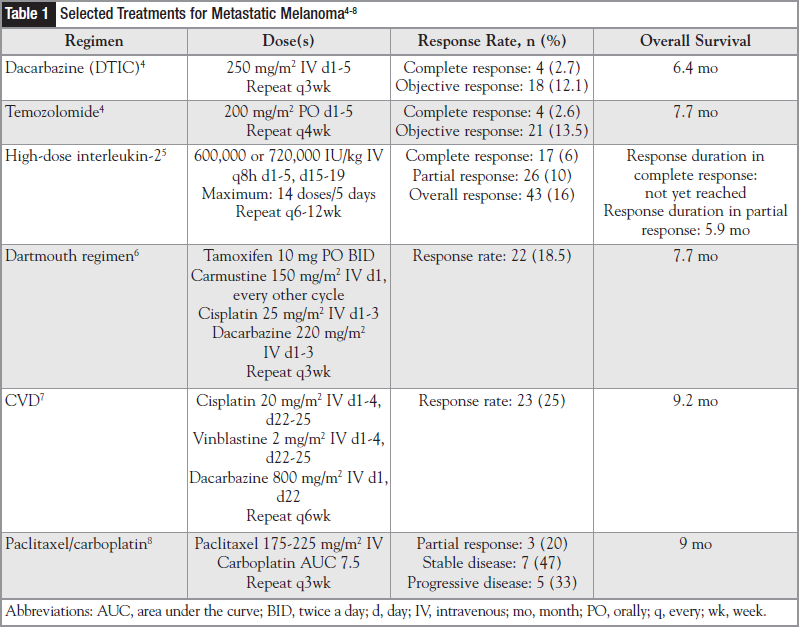 In 2010, there were an estimated 68,130 new melanoma cases in the United States,1 of which approximately 2% to 5% presented with metastatic disease.2 Advanced melanoma remains an incurable and highly treatment-refractory tumor, with treatment response rates of only 10% to 25% and a median survival of 2 to 8 months (Table 1).3-8 According to the National Comprehensive Cancer Network (NCCN), consensus is minimal regarding first- and second-line chemotherapy for patients with metastatic melanoma.2 Until the US Food and Drug Administration (FDA) approved ipilimumab and vemurafenib in 2011, dacarbazine and interleukin-2 (IL-2) were the only drugs indicated for frontline therapy.

Chemotherapy can be used for the palliative treatment of metastatic melanoma. Single-agent dacarbazine is still the “gold standard” treatment against which many newer regimens have been compared. An optimal dosing schedule has yet to be determined, however, with doses ranging from 250 mg/m2/day on days 1-5 every 21 days to 1200 mg/m2 only on day 1 of the 21-day cycle.4,9 Response rates to dacarbazine range from 5% to 15%, with an overall survival (OS) of about 7 months.4,9 Temozolomide is an oral prodrug of dacarbazine that can cross the blood-brain barrier. Similar to dacarbazine, temozolomide provides an objective response rate of 13.5%, with an OS of 7.7 months.4 Several other chemotherapy drugs have been used as single agents for the treatment of metastatic melanoma with similarly disappointing results, including carmustine, cisplatin, carboplatin, vinblastine, and paclitaxel.3

Immunotherapy with high-dose IL-2 has shown promise in the treatment of this disease, with a small percentage of patients achieving a durable remission.5 IL-2 is secreted by CD4+ T lymphocytes and modulates immunologic effects by activating natural killer cells, B lymphocytes, and macrophages.11 Although overall response rates (ORRs) have been low at 16%, patients who were able to achieve a response did not progress for more than 30 months. However, the risk of severe life-threatening toxicities (eg, capillary leak syndrome) associated with high-dose IL-2 therapy requires careful patient selection and inpatient administration of the drug.

Adverse events were primarily immune related and occurred in 60% of patients receiving ipilimumab and 32% of those receiving gp100 alone. Immune-related events included diarrhea, rash, and endocrine effects. Diarrhea was the most common adverse event, present in 27% to 31% of patients in the ipilimumab groups. Administration of corticosteroids resolved the symptoms in about 2 weeks. Death attributed to study drug occurred in 14 patients (2.1%), of which 7 were attributed to immune related events.13

In a subsequent study, Robert and colleagues evaluated ipilimumab plus dacarbazine in previously untreated patients with metastatic melanoma.14 This phase 3 clinical trial randomized patients to receive ipilimumab 10 mg/kg plus dacarbazine 850 mg/m2 (n = 250) or dacarbazine plus placebo (n = 252) at weeks 1, 4, 7, and 10, both regimens followed by dacarbazine alone every 3 weeks until week 22 for the induction phase. Patients with stable disease or an objective response rate without dose limiting toxicities at week 24 were eligible to enter a maintenance phase, during which they received ipilimumab or placebo every 12 weeks until progression, toxicity, or end of the study period. The primary end point was again changed from progression-free survival (PFS) to OS.

Treatment with ipilimumab plus dacarbazine resulted in significantly longer OS compared with dacarbazine plus placebo (11.2 months vs 9.1 months, P value not provided). Ipilimumab/dacarbazine therapy reduced the risk of progression by 24% compared with dacarbazine/placebo (HR for progression, 0.76; P = .006). Interestingly, after 6 months, some patients who were receiving ipilimumab had an improvement from partial to complete response. Immune-related adverse events occurred in 77.7% of ipilimumab/dacarbazine treated patients and 38.2% of dacarbazine/ placebo patients. Adverse event rates were similar to those seen in prior trials and included diarrhea, pruritus, and rash; however, the rates of grade 3 or 4 hepatic events (ie, AST/ALT elevations) were higher than in previous trials.14

BRAF is a serine/threonine kinase that is frequently activated by mutations in cancer.15 It is estimated that about 40% to 60% of cutaneous melanomas carry mutations in BRAF that lead to constitutive activation of downstream signaling through the MAPK pathway.15,16 Vemurafenib is a BRAF kinase inhibitor that specifically targets the BRAFV600E mutation, a mutation harbored by approximately 45% of patients with metastatic melanoma.2,17 In August 2011, vemurafenib was approved for the treatment of BRAFV600E-mutated unresectable or metastatic melanoma. The FDA simultaneously approved the Cobas 4800 BRAF V600 Mutation Test to determine eligibility for treatment with vemurafenib.16

FDA approval of vemurafenib was based, in part, on a pivotal phase 3 clinical trial by Chapman and colleagues that evaluated OS and PFS in previously untreated melanoma patients randomized to vemurafenib or dacarbazine.16 Patients were required to have stage IIIC or IV melanoma that tested positive for the BRAFV600E mutation. Pertinent exclusion criteria included untreated central nervous system metastases and the need for continued glucocorticoid therapy. Patients were randomized to receive vemurafenib 960 mg by mouth twice daily (n = 337) or dacarbazine 1000 mg/m2 intravenously every 3 weeks (n = 338). At the time of interim analysis, the data and safety monitoring board determined that prespecified OS end points had been met for statistical significance favoring vemurafenib, and dacarbazine patients were then allowed to cross over to vemurafenib. The response rate was 48% for vemurafenib and 5% for dacarbazine (P <.001). OS was 84% (95% confidence interval [CI], 78%-89%) for the vemurafenib group and 64% (95% CI, 56%-73%) for the dacarbazine group. Vemurafenib resulted in a significant reduction in the risk of death (HR for death, 0.37 [95% CI, 0.26-0.55]; P <.001).16

Vemurafenib was associated with increased cutaneous events, arthralgia, fatigue, and photosensitivity skin reactions compared to dacarbazine. Among the cutaneous events, 61 patients (18%) developed cutaneous squamous cell carcinoma, keratoacanthoma, or both. The skin lesions were successfully treated by surgical excision. Of the patients receiving vemurafenib, 38% required dose reductions due to toxicity.16 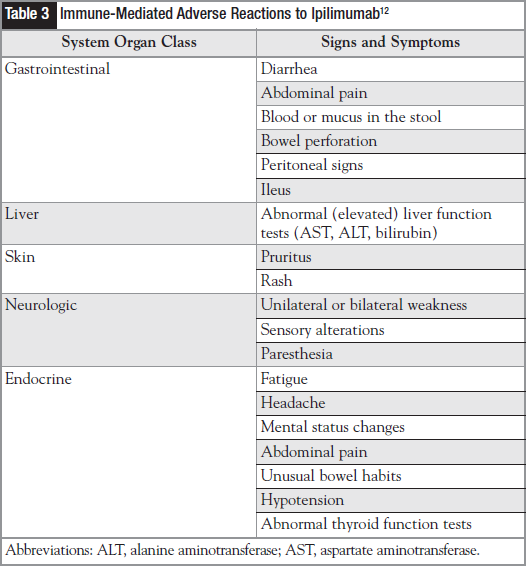 These recently approved treatments for metastatic melanoma come with advantages but also significant limitations.2 Ipilimumab is associated with serious, potentially fatal immune adverse events (Table 3), including diarrhea. Responses to ipilimumab may take months to develop and occur in less than 20% of patients; however, similar to immunotherapy with IL-2, responses are quite durable.2 In contrast, vemurafenib demonstrates high response rates that occur quickly. However, to be considered for vemurafenib therapy, a patient must test positive for the BRAFV600E mutation, and the median response duration is only about 5 to 6 weeks.2

Historically, treatment of metastatic melanoma has yielded low response rates and limited OS. The year 2011 brought about 2 advances in the treatment of metastatic melanoma—ipilimumab and vemurafenib—and their approval has altered the landscape of melanoma treatment. Despite these exciting advances, however, metastatic melanoma remains a universally fatal disease. Therefore, the NCCN recommends a clinical trial be considered as the first line of therapy for any patient with metastatic melanoma.2 If a patient is ineligible or unwilling to participate in a clinical trial, choice of therapy depends on patient characteristics. A BRAFV600E–positive patient who is symptomatic from his or her disease may benefit from up-front therapy with vemurafenib. Conversely, a clinician may choose ipilimumab for the patient who has lowvolume disease, a good performance status, and tests positive for the BRAF–wild type mutation.

While questions remain regarding optimal dosing of ipilimumab (3 mg/kg vs 10 mg/kg), the role of maintenance therapy, and the efficacy of combination regimens, as well as the fact that these drugs also have a significant financial impact both on the individual patient and the healthcare system as a whole, this is still an exciting new era in the treatment of metastatic melanoma.