Myeloproliferative neoplasms (MPNs) are somewhat rare chronic hematologic malignancies. There are no known cures, but the disease itself is treatable. According to the World Health Organization’s revised WHO Classification of Tumors of the Hematopoietic and Lymphoid Tissues, MPNs include essential thrombocythemia (ET), polycythemia vera (PV), and idiopathic myelofibrosis (IMF), also referred to as primary myelofibrosis (Table 1).1 IMF, ET, and PV are considered Philadelphia chromosome (Ph) negative. Chronic myelogenous leukemia (CML) is considered Ph positive. This review article will focus on IMF, and the new treatment approved by the US Food and Drug Administration (FDA).

In 1951, William Dameshek, a preeminent American hematologist, described the concept of myeloproliferative disorders by grouping together CML, ET, PV, IMF, and erythroleukemia. He articulated that a self-perpetuating trilineage myeloproliferation underlined their pathogenesis.2

IMF is a disorder of the blood cells wherein the bone marrow reveals fibrous tissue, and lab values demonstrate varying degrees and combinations of leukopenia, anemia, and thrombocytopenia. The disease is thought to originate from the neoplastic transformation of a single hematopoietic stem cell. The disease presents either de novo or in the setting of PV or ET.3 Bone marrow morphology is critical to the diagnosis and will generally show a dramatic increase in reticulin fibers and collagen together with a loss of normal hematopoietic cells. Additionally, normocytic anemia with nucleated red blood cells and an increase in megakaryocytes is seen on histologic examination.4 The disease affects both men and women equally and is usually diagnosed in the fifth to seventh decade of life. There are no known risk factors, but there have been reports that myelofibrosis may be linked to immunologic-mediated hyperplasia of marrow suggestive of lupus erythematosus, and other connective tissue diseases.4 Additionally, exposure to benzenes or high-dose ionizing radiation has preceded the diagnosis of primary myelofibrosis.5 Prognosis varies according to a set of clinical factors, including hemoglobin level, constitutional symptoms, circulating blasts, leukocyte count, and cytogenetics.6 Morbidity and mortality are commonly associated with leukemic transformation, infection, portal hypertension, and thrombohemorrhagic events.7 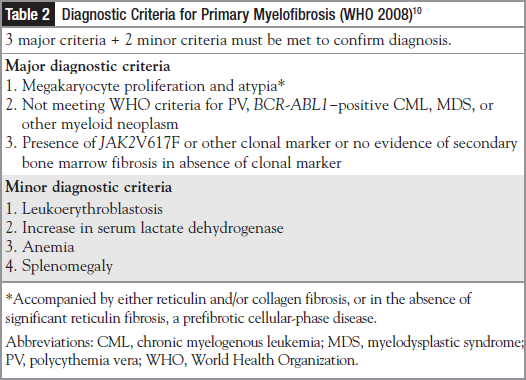 Approximately one-quarter of patients with IMF are asymptomatic at the time of diagnosis.8 Patients who are symptomatic may present to the primary care provider with complaints of fatigue, weakness, shortness of breath, and weight loss. Some patients may also complain of left upper quadrant pain or discomfort due to splenomegaly.8 Lab values can be very broad. Normocyticnormochromic anemia is present in almost all patients. In 1 study the hemoglobin concentration in patients at diagnosis was 9.5 to 11.6 g/dL, with a range of 4 to 20 g/dL among a total of 539 patients in 4 studies.8 Anisocytosis (variation in size) and poikilocytosis (variation in shape) are constant findings, as are teardrop-shaped red cells.7 Prognosis worsens with increased presence of the clinical manifestations listed above and shown in the Figure.9 In 2008, WHO recommended 2 sets of specific criteria (major and minor) to help clinicians make an accurate diagnosis (Table 2).10

Role of the Janus-Associated Kinase (JAK) Pathway Advances in the understanding of the pathogenesis of Ph-negative MPNs such as IMF have led to the discovery of the JAK2V617F mutation as a prospective therapeutic target.11 The JAK pathway plays a major role in blood cell production and immune and inflammatory responses.12 Overactivity or imperfections in this pathway are thought to be responsible, in part, for many disease states, including IMF. The JAK pathway sends out signals from blood cell growth factors, cytokines, or hormones outside the bone marrow stem cell to its nucleus. Under normal functioning of the bone marrow, suitable blood cell development and utility are ensured.12 There is a strong association between abnormal cell signaling in the JAK pathway and the development of MPNs.12,13

Allogeneic stem cell transplantation (SCT) offers the possibility of cure for some patients with IMF.14 However, the risk of graft-vs-host disease, transplant related death, and relapse of the myelofibrosis requires careful selection of appropriate candidates. Until recently there were few, if any, treatments that provided hope for patients ineligible for transplant. Most of the treatment options were palliative in nature, intended to minimize anemia, neutropenia, or thrombocytopenia, as well as the many constitutional symptoms experienced by the majority of IMF patients. Given the essential role of the JAK pathway in blood cell production and immune function, scientists began researching the potential of JAK inhibition for treating patients with IMF.

Approval of a New Drug

On November 16, 2011, the FDA approved ruxolitinib (Jakafi) for the treatment of intermediate- and high-risk myelofibrosis.15,16 The oral drug is the first in a new class of drugs known as JAK inhibitors. The drug inhibits JAK1 and JAK2 pathways. The approval was based on results from 2 randomized phase 3 trials—COMFORT-I and COMFORT-II—which tested the drug in patients with post-PV myelofibrosis and post-ET myelofibrosis. Patients in both trials were resistant or refractory to available therapy. Additionally, they were ineligible for SCT. The COMFORT trials established that patients treated with ruxolitinib experienced significant reductions in splenomegaly. COMFORT-I also demonstrated improvements in symptoms as measured by the modified Myelofibrosis Symptom Assessment Form (MFSAF) and the MFSAF Total Symptom Score to include abdominal discomfort, pain under left ribs, satiety, night sweats, bone and muscle pain, and itching. Most patients on placebo had worsening of these symptoms.15

At the time of approval, 75% of the patients on study 1 and 67% on study 2 who achieved at least a 35% reduction in spleen volume maintained this reduction. The most common adverse events in both studies were thrombocytopenia and anemia. These were manageable and rarely led to discontinuation of the drug.16 The recommended starting dose of ruxolitinib is 20 mg orally twice daily for patients with a platelet count above 200 x 109/L, and 15 mg twice daily for those with a platelet count between 100 and 200 x 109/L.16

Patients diagnosed with IMF do not comprise a great proportion of patients in the oncology setting. However, their uncommon, mostly incurable disease makes them at least as vulnerable as those with the most commonly diagnosed cancers. Science has been focusing on personalized medicine, and for the few diagnosed with IMF, the JAK inhibitors represent a new option for IMF management. Based on the data from the COMFORT studies, ruxolitinib has been approved for use in patients with intermediate/high-risk myelofibrosis, offering patients some hope now, and for the future development of other targeted therapies.