Basal cell carcinoma (BCC) and squamous cell carcinoma (SCC), commonly referred to as nonmelanoma skin cancers (NMSCs), are the most common types of cancers in the United States. These 2 cancers account for approximately 2 million cases of skin cancer annually.1 BCC is approximately 4 to 5 times more common than SCC.2 Although rarely metastatic, BCC and SCC can cause substantial local destruction involving extensive areas of soft tissue, cartilage, and bone, as well as disfigurement. It is estimated that the cost of treating these NMSCs in the Medicare population exceeds $400 million annually.3

The goal of primary treatment for BCC of the skin is curing the tumor. Surgical approaches are the most common treatment and offer the most effective method for achieving cure for this condition; however, considerations related to preserving function; preservation, restoration, or physical appearance; and patient preference all may lead to the choice of radiation therapy as the primary treatment to achieve optimal overall results.4 For patients who have low-risk, superficial BCC, or for those in whom surgery or radiation is contraindicated or unfeasible, topical therapies or vigorous cryotherapy may be considered, although the cure rate with these options may be lower. In addition, for patients at high risk for multiple primary skin tumors, increased surveillance and prophylactic measures may be indicated.4

Postoperative radiation has been widely accepted as a valuable approach for high-risk patients to reduce the rate of recurrence. Adjuvant radiotherapy is recommended by the National Comprehensive Cancer Network panel for any NMSC that shows evidence of substantial perineural involvement; that is, involvement of more than a few small or large nerves.4 All patients with BCC of the trunk and extremities who have undergone lymph node dissection should be considered for adjuvant radiation therapy; despite resection followed by radiation therapy, patients at high risk often experience locoregional recurrence and distant metastasis. The behavior of cutaneous BCC is characteristically indolent, but it rarely metastasizes to distant areas. When the disease does metastasize to distant sites, systemic therapy is indicated.4

Extensive research has led to advances in the understanding of the genetics of NMSCs.5 Among these advances, an understanding of the role of the sonic hedgehog pathway has played a pivotal role in understanding the pathogenesis of BCCs. We now know that mutations in PTCH, the patched gene located on chromosome 9q that codes for the sonic hedgehog receptor, are the underlying cause of nevoid BCC syndrome. These mutations are also common in sporadic BCCs. In addition, specific mutations in the tumor suppressor gene p53 appear to be involved in the development of NMSCs.5

On January 30, 2012, the FDA approved vismodegib (Erivedge), a hedgehog pathway inhibitor, for the treatment of BCC in adults with locally advanced or metastatic disease who are not candidates for surgery or radiotherapy. The FDA used its priority review process for the approval of vismodegib; this approval was based on the results of an international, open-label, single-arm trial that evaluated the efficacy and safety of vismodegib in 104 patients with locally advanced or metastatic BCC.

The approval of vismodegib represents the first approved therapy for patients with locally advanced or metastatic BCC whose disease is not amenable to surgery or radiation therapy, which are the standard treatments for this serious condition. In addition, vismodegib’s oral formulation may be viewed as more convenient for patients and may increase patient adherence to therapy. Some type of assistance program may be necessary to increase patients’ ability to obtain the drug.

Vismodegib binds to and inhibits smoothened, a transmembrane protein involved in hedgehog signal transduction.6 Vismodegib is eliminated via multiple pathways, but it is predominantly excreted unchanged. Inhibition of the cytochrome (CY) P450 is not predicted to alter vismodegib’s systemic exposure, because steady-state plasma concentrations of vismodegib were observed in patients enrolled in vismodegib’s clinical trials who were being treated concomitantly with CYP3A4 inducers or CYP3A4 inhibitors.6

The efficacy and safety of vismodegib was evaluated in an international, single-arm, open-label trial of 104 patients with metastatic BCC (n = 33) or with locally advanced BCC (n = 71). Enrolled patients with locally advanced BCC had to have lesions that recurred after radiotherapy, unless radiotherapy was contraindicated or inappropriate (ie, Gorlin syndrome, limitations because of the location of the tumor), or in cases where the lesion was unresectable or when surgical resection would result in substantial deformity.

Patients received vismodegib 150 mg/day orally until disease progression or unacceptable toxicity occurred. The primary efficacy outcome of this study was determination of objective response rate (ORR), which was assessed by an independent review facility. In the cohort of patients with metastatic BCC, tumor response was evaluated using the Response Evaluation Criteria in Solid Tumors (RECIST) Version 1.0. In the cohort of patients with locally advanced BCC, evaluation of tumor response included measurement of externally assessable tumor (including scarring) and assessment for ulceration in photographs, radiographic assessment of target lesions when appropriate, and tumor biopsy.6 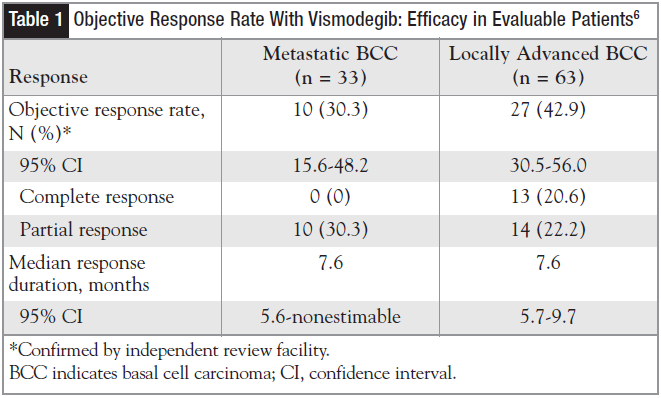 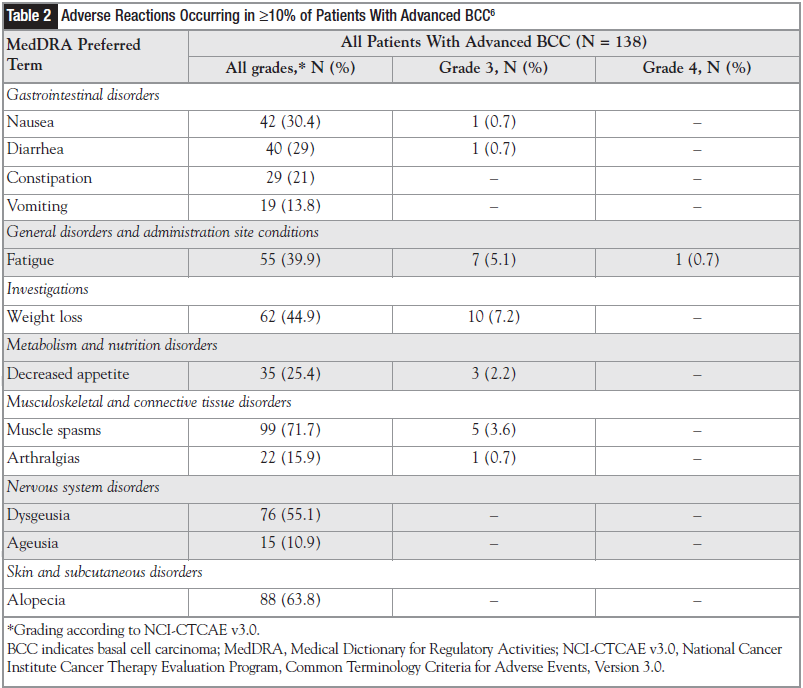 When vismodegib monotherapy was administered at daily oral doses of ≥150 mg in 4 open-label, uncontrolled, dose-ranging or fixed single-dose clinical trials enrolling a total of 138 patients with advanced BCC, the most common adverse reactions (≥10% of patients) included muscle spasms, alopecia, dysgeusia, and others, as shown in Table 2. Furthermore, 3 of 10 premenopausal women developed amenorrhea while being treated with vismodegib. In addition, treatment-emergent grade 3 laboratory abnormalities were observed in 11 patients in clinical trials; 6 (4%) patients experienced hyponatremia, 2 (1%) patients experienced hypokalemia, and azotemia was reported in 3 (2%) patients.6 The safety and effectiveness of vismodegib has not been established in patients with renal or hepatic impairment. In addition, clinical trials of vismodegib did not include sufficient numbers of patients aged ≥65 years to establish whether this patient population responded differently to vismodegib than younger patients. The safety and effectiveness of vismodegib have not been established in pediatric patients.6

Vismodegib can result in severe birth defects or embryo-fetal death. Vismodegib is embryotoxic and teratogenic in animals. Teratogenic effects with this medication included severe midline defects, missing digits, and other irreversible malformation. In rats at maternal exposures lower than human exposures of the recommended dose (150 mg/day), vismodegib was teratogenic, embryotoxic, and fetotoxic. Malformations in rats included craniofacial anomalies, open perineum, and absent or fused digits. Fetal retardation and variations were also observed.

Patients should be advised not to donate blood or blood products while receiving vismodegib and for at least 7 months after the last dose of vismodegib is received.6

The recommended dose of vismodegib is 150 mg orally once daily until evidence of disease progression exists or until unacceptable toxicity is noted. If a dose of vismodegib is missed, the dose should not be made up. Dosing should resume with the next scheduled dose.6 Vismodegib may be taken with or without food. The capsule should be taken whole and not be opened or crushed. Vismodegib is not available at local drugstores and is only distributed through specialty pharmacies.

Vismodegib, a hedgehog pathway inhibitor, was approved by the FDA earlier this year for the treatment of BCC in adults with locally advanced or metastatic disease who are not candidates for surgery or radiotherapy. This approval, which was done under the FDA’s priority review process, was based on the results of an international, open-label, single-arm trial that evaluated the efficacy and safety of vismodegib in 104 patients with locally advanced or metastatic BCC. Vismodegib is the first FDA-approved agent for the treatment of this serious condition. Although BCC is usually curable if lesions are contained to a small area of skin, in rare cases the lesions can become disfiguring, invade surrounding tissue, and/or metastasize. In these instances of advanced BCC, the disease cannot be effectively managed with surgery or radiation, the standard treatments for this common skin cancer. This recent approval of vismodegib fills a gap and an unmet need in the treatment paradigm of this serious condition.