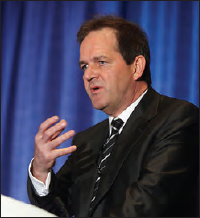 CHICAGO—Several studies addressed key questions in the treatment of non-Hodgkin lymphoma (NHL). One evaluated a shorter, more intense rituximab- based regimen, and another evaluated the benefit of autologous stem-cell transplantation (ASCT) in high-risk patients. The 21-day regimen of rituximab plus cyclophosphamide, doxorubicin, vincristine, and prednisolone (R-CHOP) is still the standard of care for this paient population.

Rituximab revolutionized the care of NHL and is essentially part of the treatment for all patients with this disease, but researchers continue to evaluate various schedules for delivering the drug.

One debate during ASCO 2011 focused on whether the standard 21-day regimen can be shortened to 14 days; however, investigators from the United Kingdom reported no advantage with the 14-day regimen.

After a median follow-up of 37 months, the rates of overall survival (OS) and progression-free survival (PFS) were similar, as were objective response rates.

According to Cunningham, the results do not support a shift in clinical practice from R-CHOP-21 to RCHOP- 14.

Julie M. Vose, MD, of the University of Nebraska Medical Center, Omaha, discussed the UK trial’s findings and agreed. But she added that in younger patients at high risk for recurrence, R-CHOP-21, followed by autologous transplantation of peripheral stem cells, should be offered as a standard of care.

This strategy was shown to be effective in the phase 3 intergroup SWOG S9704 trial of 253 patients with NHL that was presented at the meeting by Patrick J. Stiff, MD, of Loyola University Medical Center, Chicago.

ASCT after CHOP-based induction therapy improved PFS in patients who had an aggressive form of the disease, as indicated by their high or highintermediate International Prognostic Index score.

Patients responding to CHOP, with or without rituximab, had a 2-year PFS rate of 69% with ASCT compared with 56% with the induction therapy alone, which translates to a 72% increase in PFS (P = .005).

The 2-year OS rates were similar between the 2 groups, at 74% and 71%, respectively; however, many patients in the control arm underwent a salvage transplant, which may have confused this analysis, Stiff pointed out.

The survival benefit was most apparent in patients with high International Prognostic Index score; in this subgroup, the 2-year PFS rate was 75% with transplant compared with 41% with standard care, and the 2-year OS rates were 82% and 64%, respectively.