In 2017, the US Food and Drug Administration (FDA) approved 46 new drugs, a 21-year high. In addition to these impressive approvals, the first-ever 3 gene therapies were also approved. FDA Commissioner Scott Gottlieb, MD, noted that these approvals represent “a whole new scientific paradigm for the treatment of serious diseases.”1

These new drugs mark significant advances in the treatment of cancer, inflammatory diseases, multiple sclerosis, and rare (or orphan) diseases, with almost 40% of the novel drugs being designated as orphan drugs.2

FDA Makes Use of Expedited Processes

Under the leadership of Dr Gottlieb, the FDA has begun to use recent policy changes to accelerate the drug approval process. Of the 46 novel drugs, 28 were reviewed under ≥1 of the expedited approval pathways, representing 61% of the new drugs approved (Figure).2 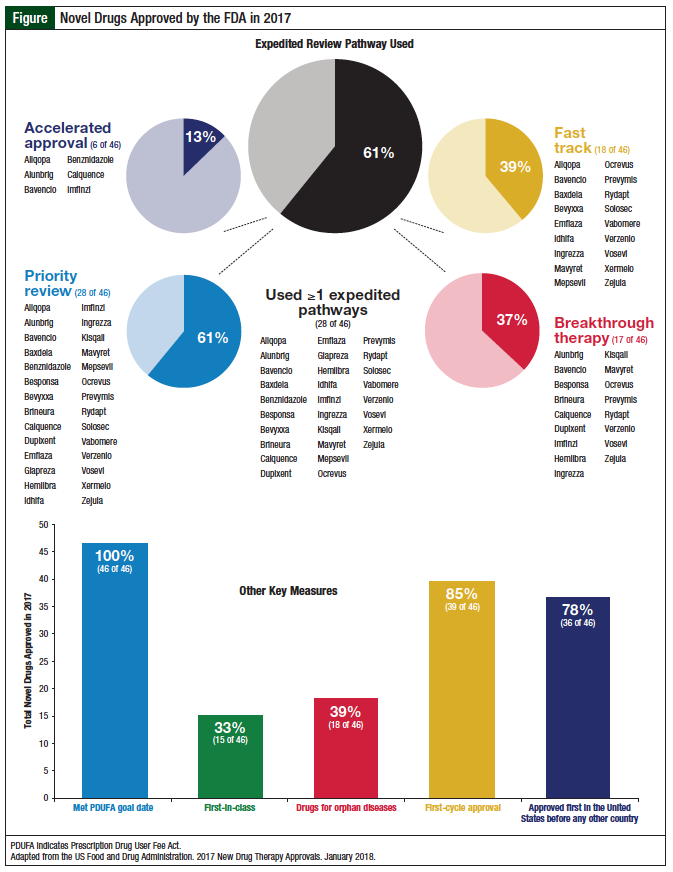 Of note, 18 (39%) drugs were approved using the fast-track process, and 17 (37%) were given breakthrough therapy designation.2 These expedited pathways allow the FDA flexibility in approving drugs that provide a benefit over current treatments for serious or life-threatening illnesses.

Other important firsts resulting from the expedited process in 2017 include 78% of the new drugs were approved in the United States before other countries; 85% were first-cycle approvals; and 100% of approvals met their Prescription Drug User Fee Act date for application review. Going into 2018, the FDA will need to continue streamlining “the regulatory process for approval and oversight of medical treatments without diminishing the agency’s commitment to safety and efficacy,” FleishmanHillard suggests.3

A Focus on Oncology

In 2017, 16 of the 46 (35%) new drugs approved and 2 of the novel cell-based (or gene) therapies were in oncology. More than 50% of the new oncolytic therapies were oral agents.4 In addition, last year had many “firsts,” including new first-line therapies, first therapies for patients with no or very limited treatment options, and first treatments for relapsed or refractory cancers.

One of the highlights was the approval of oral cyclin-dependent kinase (CDK)4/CDK6 inhibitors for first-line treatment of hormone-dependent breast cancer. The first of these agents to be approved in the first-line setting was ribociclib (Kisqali), which was approved in March 2017 based on an overall response rate (ORR) of 53% when used in combination with an aromatase inhibitor.4 In addition, palbociclib (Ibrance), the first CDK4/CDK6 inhibitor to be approved by the FDA (in 2015), received a new indication in March 2017 as a first-line treatment.4 The third CDK4/CDK6 agent, abemaciclib (Verzenio), was approved in September 2017 for patients with disease progression after endocrine therapy.4

Another major treatment breakthrough in 2017 was the FDA approval of the first 2 chimeric antigen receptor (CAR) T-cell (or gene) therapies for cancer. The first CAR T-cell therapy, tisagenlecleucel (Kymriah), was approved in August 2017 for the treatment of acute lymphoblastic leukemia (ALL) based on a single-arm trial of 63 pediatric and young adult patients with relapsed or refractory ALL, showing an 83% remission rate and a 63% complete response rate.4

The second gene therapy, axicabtagene ciloleucel (Yescarta), was approved by the FDA in October 2017 for refractory aggressive B-cell non-Hodgkin lymphoma, based on a single-arm clinical trial that showed an ORR of 72% and a complete response rate of 51% in patients with refractory aggressive disease.5 These novel therapies, however, came to market with a high price tag, which made news headlines. Nevertheless, the remarkable efficacy of CAR T-cell therapies in difficult-to-treat patients who have few treatment options may justify the high cost.

Two new immunotherapies targeting the checkpoint programmed-cell death ligand-1 (PD-L1) inhibitor were approved last year. Durvalumab (Imfinzi) was approved for the treatment of urothelial cancer and avelumab (Bavencio) was approved for Merkel-cell carcinoma. These 2 approvals add up to a total of 5 available therapies that target the PD-1/PD-L1 checkpoint pathway.4

Overall, 2017 was a year of major advances in the treatment of hematologic and solid organ tumors, with many first-in-class novel treatments.

As in previous years, several new agents were approved for rare (or orphan) diseases. Perhaps the most publicized was the third gene therapy, voretigene neparvovec (Luxturna), the first gene therapy approved for patients with RPE-65–mediated inherited retinal diseases, who now can be offered a treatment that improves visual capabilities and may prevent vision loss.6

Dupilumab (Dupixent), a first-in-class interleukin (IL)-4 receptor alpha antagonist that blocks IL-4 and IL-13 responses, was approved for moderate-to-severe atopic dermatitis; it is the first drug with this new mechanism of action to be approved for a chronic skin condition that previously could only be treated off-label with topical and immunosuppressive agents.2

The 2 notable approvals in neurology include ocre­lizumab (Ocrevus) for relapsing or remitting multiple sclerosis and for primary progressive disease; ocrelizumab acts on B-cells and showed strong comparative data in a head-to-head clinical trial versus an interferon beta-1a.7 The second is edaravone (Radicava)—the first new treatment approved in more than 20 years for amyotrophic lateral sclerosis.2

Although many drugs are available for the treatment of inflammatory disorders, rheumatoid arthritis and plaque psoriasis saw important new additions to their treatment armamentarium in 2017. The IL-23p19 blocker guselkumab (Tremfya), and brodalumab (Siliq), which targets IL-17, represent significant advances in the treatment of patients with plaque psoriasis, achieving Psoriasis Area and Severity Index scores of 100 in some patients with moderate-to-severe disease.8,9 In addition, sarilumab (Kevzara), an anti–IL-6 agent, joined the treatment choices for rheumatoid arthritis.2

The FDA drug approvals in 2017 came close to the 1996 record high of 53 approvals. Many of the new approvals are specialty drugs, continuing the trend seen in previous years, with cancer and rare diseases remaining top priorities in drug research and development. Most important, the pace of new drug approvals in 2017 reflected improved efficiency of the FDA. This is attributed to the use of new and expedited regulatory review processes, such as fast track, accelerated approval, breakthrough therapy designation, and priority review. Overall, 2017 was a dynamic year for drug approvals, providing substantial challenges for Pharmacy and Therapeutics committees and for benefit design programs.