Patients receiving mogamulizumab had a median progression-free survival (PFS) of 7.7 months versus 3.1 months in patients who received vorinostat. This difference represents a 47% reduction in the hazard ratio for disease progression or death in favor of the anti-CCR4 antibody, stated Dr Kim.

“Mogamulizumab demonstrated convincing clinical activity, not just in skin but also in clearing malignant T-cells in the blood and lymph nodes. PFS and overall global response outcomes are clearly superior,” said Dr Kim. “The side effects are tolerable, and we see measurable improvements in quality of life with mogamulizumab compared with vorinostat. Taken together, these findings represent a durable and clinically meaningful benefit for patients with CTCL,” she added.

The findings came from the randomized, phase 3 clinical trial MAVORIC, which compared mogamulizumab and the histone deacetylase inhibitor, vorin­ostat, in patients with CTCL who received ≥1 previous systemic regimens. The trial’s key entry criteria mirrored the indication for which the FDA granted priority review to mogamu­lizumab in November 2017.

The trial involved 372 patients with 1 of 2 predominant subtypes of CTCL—mycosis fungoides or Sézary syndrome. Patients received mogamulizumab 1 mg/kg weekly for 4 weeks and then every 2 weeks thereafter, or vorinostat at a dose of 400 mg daily. Patients allocated to vorinostat could cross over to mogamu­lizumab at disease progression or in the event of intolerable toxicity. The primary end point was investigator-­assessed PFS.

The study population had a median age of 64 to 65 years, and more than 99% of the patients had an Eastern Cooperative Oncology Group performance status 0 or 1. Approximately 67% of the patients had stage III or IV disease. The median number of previous regimens was 3. CCR4 expression level was not included in the eligibility criteria.

The primary analysis yielded a statistically significant hazard ratio of 0.53 in favor of the anti-CCR4 antibody (95% confidence interval [CI], 0.41-0.69; P <.0001). Independent review of the primary end point was consistent with investigator assessment, as patients randomized to mogamulizumab had a median PFS of 6.7 months versus 3.8 months for the vorinostat arm (hazard ratio, 0.64; 95% CI, 0.49-0.84; P = .0007). The advantage for mogamu­lizumab was consistent across all prespecified subgroups. 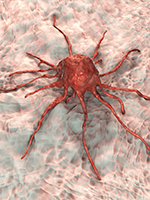