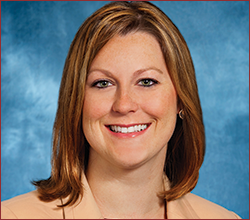 The FLT3 receptor is a transmembrane protein belonging to the type III tyrosine kinase family that plays a role in hematopoietic stem-cell proliferation and differentiation. It is also selectively expressed in CD34+ hematopoietic stem cells and immature hematopoietic progenitors in normal bone marrow, as well as other hematopoietic organs such as the spleen, liver, and other blood-forming organs (ie, bone marrow).

FLT3 mutations are common in patients with AML and can occur with other molecular mutations, such as NPM1 (typically considered a positive or favorable risk), CEBPA, and other cytogenetic defects. It is recommended that FLT3 always be tested in patients with AML, especially in those who have normal cytogenetic laboratory findings. According to Dr Seddon, test results should be available within 48 to 72 hours, at least for patients eligible for intensive induction chemotherapy.

The more common FLT3-ITD mutation has no impact on a patient’s ability to achieve complete remission, but it is associated with an increased risk for relapse, decreased disease-free survival, and shorter overall survival. The TKD mutation is less common (6%-10% incidence in patients with AML), and has no known prognostic effect. Very rarely, a small percentage of patients can have both an ITD and a TKD mutation, which carries with it worse clinical outcomes than having a single mutation.

The category of first-generation FLT3 inhibitors includes sunitinib (Sutent), sorafenib (Nexavar), lestaurtinib and tandutinib (both FLT3 inhibitors that also target other tyrosine kinases), and midostaurin (the only FDA-approved FLT3 inhibitor).

FDA approval of midostaurin was granted in 2017 for patients with newly diagnosed FLT3-positive AML, in combination with standard chemotherapy induction (cytarabine and daunorubicin) and consolidation (cytarabine). Approval was based on the results of the phase 3 CALGB 10603 (RATIFY) trial that compared midostaurin with placebo in the induction, consolidation, and maintenance settings in a group of 717 patients aged 18 to 59 years with newly diagnosed AML.

According to Dr Seddon, much of the promising data will come from second-generation FLT3 inhibition in AML.

“The second-generation FLT3 inhibitors, namely quizartinib, crenolanib, and gilteritinib, are much more selective. So, although they may target a couple of other receptors, they’re very specific and potent for FLT3,” she said.

Quizartinib is a type II inhibitor, and the most potent FLT3 inhibitor based on in vitro studies. It clears peripheral blasts by inducing apoptosis, but resistance-conferring point mutations can emerge, which likely limit its responses, Dr Seddon noted. Quizartinib is currently recruiting for 4 clinical trials, and 2 additional clinical trials are not yet recruiting.

Crenolanib, an orally available TKI, is recruiting for several trials. Notably, one of the currently nonrecruiting trials will evaluate crenolanib versus midostaurin following chemotherapy induction and consolidation for patients with newly diagnosed FLT3-positive AML.

“This head-to-head trial will be very interesting. We will have to wait several years for those results, but we are certainly excited for them,” Dr Seddon said.

Gilteritinib, another second-generation oral TKI, has shown highly potent activity against FLT3-ITD and TKD mutations. It also inhibits AXL, an oncogenic tyrosine kinase that facilitates FLT3 activation and has been implicated in some FLT3 inhibitor resistance.

“AXL is also over-expressed in AML, so gilteritinib has a couple of different targets that seem to be promising for AML therapy,” Dr Seddon said.

Gilteritinib also has several currently recruiting trials, including those in the after stem-cell transplant setting, in newly diagnosed patients, in the refractory setting, and compared with chemotherapy.

According to Dr Seddon, different types of resistance have begun to occur with these TKIs. The first is acquisition of a secondary tyrosine kinase domain-point mutation.

“So, we do see some additional acquired mutations occurring in the ATP binding domain, that ultimately alter the conformational state and weaken its binding affinity for FLT3 inhibitors,” she said.

Acquired resistance is also seen in the residue of F691L, the “gatekeeper residue,” as well as in the activation loop residues, specifically D835 and Y842.

“The D835 mutation favors the active kinase conformation, so those drugs that bind to that active conformation state would have better efficacy, or would likely be able to overcome this particular resistance mechanism. Gilteritinib and crenolanib are the 2 drugs that come to mind when we think of binding to the active conformational state, and in vitro data actually suggest that they are able to retain their activity,” Dr Seddon explained. Resistance to FLT3 inhibitors also occurs through increased ligand expression and upregulation of downstream signaling pathways (ie, MAPK/ERK).

“Going forward, ensuring that FLT3 is being tested in all of our AML patients, especially those cytogenetically-normal patients, is very important,” Dr Seddon said.

Providers should also strongly encourage clinical trial participation, she added. Because midostaurin is currently the only FDA-approved FLT3 inhibitor, helping patients obtain access to and coverage for this particular drug will play an important role in the future, as will educating other providers and patients on drug interactions in the treatment of this disease.