A Team Approach to Psychosocial Care

Karen is a 35-year-old married mother of two (Anna, age 11 and Kevin, age 9), who is a high school history teacher. She visited her primary care physician after she found a lump in her breast. Subsequent testing confirmed there was a small mass. She was diagnosed with stage II, non–estrogendependent cancer in her left breast. Treatment involved lumpectomy, radiation, and chemotherapy—as well as patient education, navigation through the healthcare system, and individual, couple, and family counseling. The individual counseling focused on anxiety, depression, and the pressure to think positive. The couple counseling focused on patient and caregiver stresses, caregiver burden, and communication between the spouses. Family counseling focused on offering age-appropriate information about both breast cancer and their mother’s condition for the children, describing the family as a team, and providing a picture of the family’s new normal. Karen is now in remission, yet the cancer center counselors continue

This case example presents state-of-the-art treatment for cancer, and it can take place in virtually every cancer center and oncology practice in the community.

Cancer affects many if not most families, whether because of cancer in a family member, a friend, a friend’s parent, or a coworker. Cancer’s ripple effect is apparent to all who work in oncology. The traditional medical focus has been on the patient’s disease, sometimes on the patient and the disease, and in recent years also on those closest to the patient who are most hit by the ripple effect. Many eminent organizations have taken note of this ripple effect and its psychosocial cost for the patient and close others. The Institute of Medicine addressed psychosocial issues in its volume Cancer Care for the Whole Patient: Meeting Psychosocial Needs,1 and other

publications such as those from the American Cancer Society address cancer’s emotional toll. This article describes a practical, counseling team approach to psychosocial care that works effectively within the larger multidisciplinary team approach common in many of today’s cancer treatment settings.

The Southwest Cancer Treatment and Research Center (SCTRC) is a regional cancer center affiliated with Texas Tech University School of Medicine and administered jointly by Texas Tech University Health Sciences Center and University Medical Center (UMC), a teaching hospital that is also the county hospital. SCTRC had more than 24,000 patient visits in 2009. It is accredited by the American College of Surgeons Commission on Cancer and is a member of the Southwest Oncology Group, the Children’s Oncology Group, and the Cancer Trials Support Unit. SCTRC is involved in numerous clinical trials. It also administers an inpatient bone marrow transplant (BMT) unit and serves a large catchment area in west Texas and eastern New Mexico.

Although it began in 1991 and opened a greatly expanded and updated facility in 2004, the SCTRC did not offer a consistent program of psychosocial services until summer 2004, when it began a novel partnering with Texas Tech University’s Department of Psychology. Aided initially by a federal grant, a practicum site for clinical and counseling psychology doctoral students was set up at SCTRC. Beginning with one student and currently sustaining eight students, SCTRC has nurtured its counseling team even as it has added other psychosocial providers, such as its patient navigator who is funded, in part, by the American Cancer Society.

What the team does 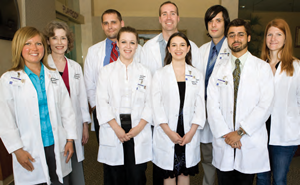 The current team of 10 includes three students with positions funded by UMC for 10 hr/week, and seven students working either 0.5 day/week (a half practicum) or two 0.5 day/week (a full practicum). SCTRC is typically staffed for all of the working week (Monday-Friday), except Friday afternoons. An additional team member, the supervisor who is a Texas Tech University psychology professor, works 0.5 day/week as the counselor at the dedicated clinic for lung cancer patients. This clinic is also staffed by a medical oncologist, pulmonologist, lung surgeon, and nurse practitioner.

Students typically self-select into a particular site within SCTRC, though the team members carry pagers and attempt to provide coverage wherever it is needed. Some counselors work alongside physicians and extenders in the outpatient clinics, whereas others prefer the infusion area or the BMT unit, where they can spend more time talking with patients and family members. All counselors try to help staff the radiation area. A patient, such as the one in the case example, might encounter several counselors in the course of his or her treatment, for example, touching base briefly in the clinic, talking at greater length (and depth) in the infusion suite, and sometimes seeing a counselor in the radiation area.

Continuity of care is always an issue. Weekly group supervision of the team and extensive note taking and exchange allow the team to function much like a relay team rather than as a series of unconnected individuals. The team has seen many members come and go during the 6 years of its existence (nearly 30 counselors, including current ones). The unifying themes across students and years have been (1) commitment to patient service, (2) particular interest in working with ill people in an outpatient medical setting, and (3) unfailing team cohesiveness. No one has been recruited to the team; virtually every counselor has sought out the team.

Much of the therapeutic work is supportive counseling and assessment of anxiety and depression in patients and, just as commonly, in their spouse/partner. During a recent afternoon, one counselor celebrated with a patient who was diagnosed with a benign breast lump instead of breast cancer, helped an adult woman come to terms with her father’s cancer diagnosis, emphasized the value of hospice services for an older widow recently referred to hospice, established rapport with a new patient and her husband by commenting on how the husband’s nonverbal behaviors answered the physician’s question even before the patient answered them (a humorous bonding moment for counselor and couple), and stood next to a favorite longtime patient when he was told that his cancer had recurred. Many counselors have referred to their work at SCTRC as a “gift,” and counselor satisfaction with their SCTRC experience is high.

How to develop a team

Our model of a counseling team is novel, practical, and could serve as a prototype for other cancer centers and community oncology practices.2 Oncology practices could partner with a local college or university, most of which would have undergraduate/graduate programs in psychology or social work. Students in such programs are commonly required to participate in practica or externships in a community agency or other setting.

A cancer center is a perfect setting, given the right preparation for both students and practicum site. Often a practicum site will provide supervision for the practicum students. If that is not available, by providing really good training for students, a site would likely obtain supervision from the academic unit whose students it trains.

The process of arranging such a partnership is not difficult. It simply requires due diligence, excellent communication, mutual respect, and the shared goal of providing training opportunities for psychosocial professionals and improving psychosocial cancer care for patients and their families and caregivers. The goals are worthwhile and achievable.