With enhanced knowledge of lung cancer cell biology and gene expression, the development of novel agents has altered the treatment paradigm for NSCLC.2 Several driver oncogenes have been identified in NSCLC, including the epidermal growth factor receptor (EGFR), anaplastic lymphoma kinase (ALK), and KRAS.2,3 Approximately 10% of patients from North America and approximately 33% of patients from East Asia have EGFR mutations.2 The majority of EGFR mutations occur in women with adenocarcinomas who have never smoked.2 The 2 tyrosine kinase inhibitors that target EGFR, afatinib (Gilotrif) and erlotinib (Tarceva), are currently approved for patients with specific EGFR mutations.2

Once thought to be poorly immunogenic, lung cancer is now understood to be vulnerable to checkpoint inhibition.4 The immune system functions to recognize foreign proteins (antigens) as abnormal and destroy them, while simultaneously protecting against tissue damage.4 Immune checkpoints, including programmed death (PD)-1, are specific pathways that are hardwired into the immune system to allow this self-tolerance. By blocking these immune checkpoint pathways, immuno-oncology agents can strengthen the ability of tumor-infiltrating T-cells to recognize cancer cells as dangerous and subsequently remove them.5

Several clinical trials are evaluating the efficacy and safety of immune checkpoint inhibitors for patients with advanced lung cancer.6,7

Based on a demonstrated overall survival advantage compared with cytotoxic chemotherapy in patients with relapsed NSCLC, nivolumab (Opdivo) was approved on October 9, 2015, by the US Food and Drug Administration (FDA) for use in patients with metastatic squamous NSCLC that has progressed with or after platinum-based chemotherapy.6-8

On October 2, 2015, the FDA approved pembrolizumab (Keytruda Injection; Merck Sharp & Dohme Corp) for the treatment of patients with metastatic NSCLC whose tumors express PD ligand 1 (PD-L1) as determined by a genetic diagnostic test, and whose disease progressed with or after platinum-containing chemotherapy.9,10 The FDA approved the companion diagnostic test, PD-L1 IHC 22C3 pharmDx, which determines PD-L1 expression, on October 9, 2015.9

The labeling for pembrolizumab for metastatic NSCLC specifically notes that patients with EGFR or ALK mutations should have disease progression while receiving FDA-approved therapy for these mutations before receiving pembrolizumab.9,10

Pembrolizumab was the first human PD-1 inhibitor to receive approval for this specific indication in the United States.11

Pembrolizumab was initially approved by the FDA on September 4, 2014, for the treatment of patients with unresectable or metastatic melanoma whose disease progressed after ipilimumab therapy, and, if BRAF V600 mutation–positive, after a BRAF inhibitor.12

Pembrolizumab, which is administered via intravenous infusion, was approved under the FDA's accelerated approval program based on the surrogate end points of overall response rate and duration of response.10 An improvement in survival or disease-related symptoms with pembrolizumab has not yet been established in metastatic melanoma or in metastatic NSCLC.10

The recommended dosage of pembrolizumab is 2 mg/kg administered as an intravenous infusion for 30 minutes every 3 weeks.10 Pembrolizumab should be administered until disease progression or until unacceptable toxicity.10

The approval of pembrolizumab for patients with PD-L1–expressing metastatic NSCLC was based on a subgroup analysis of 280 patients enrolled in the KEYNOTE-001 clinical trial, a multicenter, open-label, multicohort, activity-estimating study.9,10,13

This international clinical trial was designed to evaluate the efficacy and safety of pembrolizumab in patients with advanced NSCLC, as well as to define and validate a tumor PD-L1 expression level that is associated with the likelihood of clinical benefit with pembrolizumab.13

To be included in the efficacy analysis, patients with metastatic NSCLC had to demonstrate disease progression after platinum-containing chemotherapy, and, if appropriate, targeted therapy for ALK or EGFR mutations, as well as evidence of PD-L1 expression by a clinical trial immunohistochemistry assay.10 Patients with an autoimmune disease, with a medical condition that required immunosuppression, and those who had received more than 30 Gy of thoracic radiation within the previous 26 weeks were ineligible to participate.10

This prospectively defined subgroup was retrospectively analyzed using a validated test for PD-L1 expression tumor proportion score.10 This analysis identified a subgroup of 61 (22% of 280) patients who had a PD-L1 expression tumor proportion score of ≥50% tumor cells as determined by the PD-L1 IHC 22C3 pharmDx Kit.10 These patients received pembrolizumab 10 mg/kg every 2 or 3 weeks until unacceptable toxicity or disease progression. Assessments of tumor status were performed at 9-week intervals.10

In the retrospectively defined subgroup of 61 patients with previously treated metastatic NSCLC (median age, 60 years), 61% of patients were male and 79% were white.10 All patients had an Eastern Cooperative Oncology Group performance status of 0 or 1. The disease histology included nonsquamous (75%) and squamous (21%) NSCLC. Overall, 98% of patients had M1 disease, and 11% had brain metastases. Previous therapies included 1 (26%), 2 (30%), or ≥3 (44%) regimens.10 EGFR and ALK mutations were rare.10

A separate subgroup of KEYNOTE-001 had enrolled 25 patients with a PD-L1 expression tumor proportion score ≥50%; these patients received pembrolizumab at a dose of 2 mg/kg every 3 weeks. Although follow-up was limited, activity was also observed.10

Among the 550 patients with previously treated metastatic NSCLC in KEYNOTE-001 who received pembrolizumab, the median duration of therapy was 2.8 months (range, 1 day to 25.6 months).10 Adverse reactions reported in at least 20% of patients included fatigue, decreased appetite, dyspnea, and cough (Table 2).10 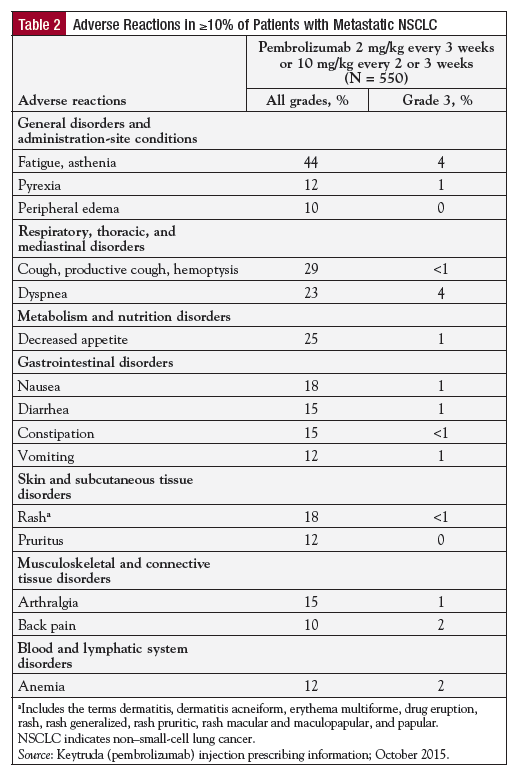 Pembrolizumab was discontinued in 14% of patients because of adverse reactions.10

Pembrolizumab has no contraindications.10

Immune-mediated colitis. Colitis occurred in 4 patients in KEYNOTE-001. The median time to onset of colitis was 1.6 months, and the median duration was 16 days. Overall, 1 patient permanently discontinued pembrolizumab because of colitis, and 3 of the 4 patients with colitis had complete resolution. Patients receiving pembrolizumab should be monitored for colitis. Corticosteroids should be administered for grade ≥2 colitis. Pembrolizumab should be withheld for moderate or severe colitis, and permanently discontinued for life-threatening colitis.10

Immune-mediated thyroid disorders. Hyperthyroidism was observed in 10 patients.10 The median time to onset was 1.8 months, and the median duration was 4.5 months.10 None of the 10 patients permanently discontinued pembrolizumab because of hyperthyroidism.10

Hypothyroidism occurred in 38 patients. The median time to onset was 4.2 months. No patient discontinued pembrolizumab because of hypothyroidism. Because thyroid disorders can occur at any time during treatment with pembrolizumab, patients should be monitored for changes in thyroid function at the start of treatment and periodically during treatment. Pembrolizumab should be withheld for severe hyperthyroidism, and permanently discontinued for life-threatening hyperthyroidism.10

Embryofetal toxicity. Pembrolizumab may cause fetal harm.10 If pembrolizumab is used during pregnancy, or if a patient becomes pregnant while taking it, she should be told of the potential hazard to the fetus.10 Women of childbearing age should use effective contraception during treatment with pembrolizumab and for at least 4 months after the last dose.10

Geriatric use. Of the 550 patients with metastatic NSCLC who received pembrolizumab, 47% were aged ≥65 years.10 No meaningful differences in the efficacy or safety of pembrolizumab were observed between elderly patients and younger patients.10

Pregnancy. Pembrolizumab can cause fetal harm.10

Nursing mothers. Nursing should be discontinued during treatment with pembrolizumab and for 4 months after the last dose.10

Pembrolizumab, a PD-1 inhibitor, is an effective and safe alternative for patients with metastatic NSCLC whose disease has progressed after platinum-based chemotherapy and whose tumor expresses PD-L1. PD-L1 expression may represent a new biomarker for the treatment of patients with NSCLC.

Pembrolizumab was approved under the FDA accelerated approval process based on the overall patient response rate data. A multicenter, randomized clinical trial is under way to compare pembrolizumab (2 mg/kg) and standard therapy in patients with relapsed NSCLC as a condition of the drug's accelerated approval. This clinical trial, known as P010, has 2 coprimary end points, progression-free survival and overall survival.9

The efficacy and safety of pembrolizumab are also being evaluated in other solid and liquid tumors, including small-cell lung cancer, ovarian cancer, renal-cell carcinoma, recurrent head and neck cancer, urothelial cancer, glioblastoma, and follicular lymphoma.14