Therapeutic targeting of the epidermal growth factor receptor (EGFR) commonly produces skin rashes, but other agents-including BRAF, mechanistic target of rapamycin (mTOR), and immune checkpoint inhibitors-can also produce rashes, as can some older agents, such as liposomal doxorubicin and gemcitabine.1 The following are some recommendations for the management of rashes:

Pruritus usually responds to oral antihistamines and topical corticosteroids, but severe cases can be treated with the neurokinin-1 receptor inhibitor aprepitant. In a small study of 45 patients with refractory itching to standard pruritus treatments, aprepitant achieved relief in 91%, and pruritus recurred in only 13%.2

Approximately 15% to 25% of patients undergoing treatment with EGFR and mTOR inhibitors can have paronychia, a soft-tissue infection around the nail, as a result of nail-plate thinning and ingrowth. Local treatment depends on paronychia severity. Mild cases can be treated with topical therapies; if there is discharge and a documented infection, an oral antibiotic is warranted. Soaking nails in a vinegar or bleach solution can also be helpful. Grade 2 to 3 paronychia can be treated via cauterization with silver nitrate.

When patients do not respond to these measures, partial or complete nail avulsion (removing the nail plate) may be warranted. " This is initially scary to patients, but they are often very relieved after we do this," stated Dr Lacouture. Avulsion, which is usually well tolerated, can provide relief until the nail grows back, he added.

The nail changes induced by treatment with taxanes-especially docetaxel-are different from those induced by EGFR and mTOR inhibitors; elevation of the nail plate, inflammation, and sometimes bleeding and infection are seen. Severe nail changes can often be prevented by having the patient grip ice bags for 15 minutes before infusion, during treatment, and 15 minutes postinfusion.

Brittle nails also result from EGFR inhibition, and may be seen in patients with breast cancer treated with the mTOR inhibitor everolimus, or the monoclonal antibodies trastuzumab/pertuzumab. Dr Lacouture recommended painting the nails with a hydrosoluble or polyureaurethane 16% nail lacquer.

Alopecia is a well-established side effect of numerous cytotoxic agents, but hair thinning can also occur with BRAF, MEK, EGFR, and hedgehog inhibitors. Dr Lacouture made the following recommendations to prevent or manage hair loss:

Another side effect of treatment with EGFR inhibitors is hirsutism of the face.1 Dr Lacouture recommends removing unwanted facial hair by threading or plucking-not with wax or depilatories.

Hand-foot syndrome (HFS) can be seen with a variety of drugs, and its manifestations can differ by drug class. The only randomized study of HFS prevention, conducted in patients receiving capecitabine, showed that the prophylactic, celecoxib 200 mg daily, reduced HFS of grade ≥ by >50% versus the control.7 Oral corticosteroids can be beneficial when HFS is caused by liposomal doxorubicin. Although they lack data, approaches that may ameliorate multikinase inhibitor-induced HFS include clobetasol foam, salicylic acid 6% cream, and lidocaine creams and patches.1

These management suggestions may ameliorate dermatologic toxicity, which matters to patients now more than ever, Dr Lacouture emphasized. "Improvements in survival have given patients more opportunity to worry about their appearance and quality of life." 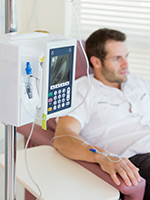