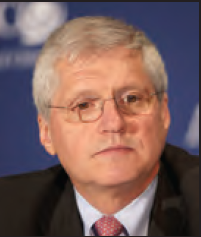 CHICAGO—Results from an important phase 3 trial presented at the plenary session could lead to prolonged treatment with adjuvant imatinib for gastrointestinal stromal tumors (GIST).

The extension of imatinib treatment to 3 years, compared with the usual 1 year, resulted in a 54% reduced risk of recurrence and 55% reduced risk of death within 5 years for patients with high-risk disease, reported Heikki Joensuu, MD, of Helsinki University Central Hospital in Finland.

“These data are pretty compelling,” Joensuu commented. “I would not be surprised if the standard will be 3 years of adjuvant imatinib in the near future.” Mark G. Kris, MD, who moderated a press briefing and is chair of the ASCO Cancer Communications Committee, agreed. “The entire oncology community was extremely excited when we saw the survival curve and those num-bers at 5 years. It’s one of the amazing stories in oncology, and it is the kind of data that change guidelines,” he said.

The SSGXVIII/AIO study, which was conducted by the Scandinavian Sarcoma Group and Sarcoma Group of the AIO, Germany, was an open-label phase 3 study that evaluated 36 months versus 12 months of adjuvant imatinib administered after surgical resection to 400 GIST patients considered to have a high risk of recurrence.

Grade 3 or 4 adverse events were more common with longer treatment, and more patients discontinued treatment in the 36-month arm.

More May Be Better, Discussant Agreed

Charles D. Blanke, MD, chief of medical oncology, University of British Columbia, Vancouver, critiqued the SSGXVIII/AIO study, noting that its conclusions were “valid.” He suggested that oncologists who typically initiate imatinib on relapse might want to rethink this strategy.

“If you have a patient who has high-risk GIST, at least as defined by the study, giving him or her 3 years of imatinib represents the new gold standard,” he maintained. “The overall survival benefit demonstrated with immediate postoperative imatinib means it is no longer acceptable to withhold treatment in the adjuvant setting, hoping to ‘catch up’ when a patient has recurrent meta static disease.”

He acknowledged, however, staying on treatment for 3 years could be problematic for many patients, as suggested by a higher rate of side effects and more than a doubling in the dropout rate among patients who received imatinib for that long. Although it is possible that treatment even beyond 3 years could be even more beneficial, he noted, “Difficulties on the 3-year arm of SSGXVIII/AIO may bode poorly for therapy lasting even longer.”