Chemotherapy appears to be associated with a statistically significant decrease in the relative risk of prostate cancer-specific mortality among older men with stage IV prostate cancer who are receiving androgen-deprivation therapy (ADT), according to a new study.

The findings, based on data from the Surveillance, Epidemiology and End Results (SEER) and Medicare databases, may help pharmacists better counsel their older male patients about the potential benefits from chemotherapy. The survival benefit, however, applied to men with stage IV prostate cancer who had metastatic disease, but not to men with stage IV nonmetastatic disease.

"Essentially what we found was that there was about a 20% reduction in mortality for the people receiving chemotherapy compared with those who did not receive chemotherapy. Further more, what we found was that this benefit was only apparent in the group that has metastatic disease. We found no such benefit in the group with nonmetastatic disease," said lead study investigator Michael Grabner, PhD, a postdoctoral fellow in pharmaceutical health services research at the University of Maryland School of Pharmacy, Baltimore.

He said recent clinical trials have demonstrated a survival benefit for chemotherapy in men with castrationresistant prostate cancer. However, this study is unique because of its design and sample size. In this study, all the patients were 66 years old or older and were diagnosed with prostate cancer between 2000 and 2005. All the subjects were followed until death or the end of the study period (December 31, 2007). The investigators restricted the cohort to men with incident stage IV disease who had received ADT. They were able to overcome observable selection bias by balancing covariates across the treatment and control groups using propensity-score matching. The analysis was conducted for the entire cohort as well as for two subsets (men with metastatic disease and men without metastatic disease).

The researchers found that for the full unmatched sample, chemotherapy was associated with a 14% reduction in the hazard of prostate cancer-specific mortality compared with no chemo therapy. "The take-home message for oncology pharmacists is that it is crucial to differentiate be tween men with stage IV prostate cancer who have metastatic disease from the men who don't have metastatic disease," Grabner said. "It appears that the ability of chemotherapy to benefit these patients may depend on that difference."

Study coinvestigator C. Daniel Mullins, PhD, a professor of pharmacology at the University of Maryland School of Pharmacy, said the study findings were somewhat surprising since no benefit was seen in the men with nonmetastatic disease. "Our study shows that choosing the right patient to treat is important," he told The Oncology Pharmacist. "The pharmacist has always been the person who is in the best position to communicate with the patient about their medicine. The physician will diagnose the disease, but the responsibility of explaining to the patients why it is so important to take the prescribed medicines gets transferred to the pharmacist." 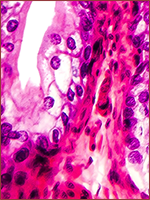