Melanoma represents the most dangerous form of skin cancer.1 According to recent data, the 5-year relative survival rate for Americans with distant melanoma is only 17%.2 The National Cancer Institute estimated that in 2015 there were 73,870 new cases of skin melanoma and more than 9900 patients died from this disease.2 In the United States, the total estimated national expenditures for the treatment of melanoma reached $2.8 billion in 2015.3

Immunotherapy agents have always played a role in the management of melanoma.5 Historically, interleukin-2 and interferon were considered standard treatments for early and advanced stages of the disease.5 As scientific knowledge has evolved, however, it has become evident that naturally occurring immune checkpoints and other regulatory pathways thwart the body’s attempts to remove cancer cells.5

Commercially available therapies that can affect these pathways include monoclonal antibodies targeting either cytotoxic T-lymphocyte antigen-4, such as ipilimumab, or PD (programmed-cell death)-1, such as pembrolizumab or nivolumab.4 By blocking these pathways, checkpoint inhibitors strengthen the ability of tumor-infiltrating T-lymphocytes (T-cells) to detect cancer cells for the danger that they represent and remove them.6 Clinical trials of checkpoint inhibitors in patients with melanoma have demonstrated impressive objective response rates, and, in some cases, extended survival, despite advanced stages of disease and significant tumor burden.7-10

Recognizing that melanoma and other cancer cells have the ability to avoid immune detection using a wide variety of strategies, a new array of treatments is being developed with the goal of enhancing T-cell, dendritic cell, and other immune-mediator functioning.11 Several novel immunotherapy agents are being studied in melanoma to determine whether they can eliminate melanoma cells and establish active, ongoing, and long-term immune surveillance against new cancer cells.11

On October 27, 2015, the US Food and Drug Administration (FDA) approved talimogene laherparepvec (Imlygic; Amgen) for the local treatment of unresectable cutaneous, subcutaneous, and nodal lesions in patients with melanoma that has recurred after initial surgery.12 Talimogene laherparepvec (T-VEC) is the first genetically modified oncolytic viral therapy approved for direct injection into melanoma lesions.12

The FDA approval was based on the pivotal study of T-VEC, OPTiM, a multicenter, phase 3, clinical trial that enrolled patients with metastatic melanoma that could not be surgically removed.12,13 The primary end point was the durable response rate, which was defined as the percentage of patients who achieved a complete or a partial response for a minimum of 6 months.14 Patients who received T-VEC in this study were significantly more likely to experience a durable response compared with patients who received the comparator therapy, granulocyte-macrophage colony-stimulating factor (GM-CSF).12-14 T-VEC has not been shown to affect overall survival, or to have a clinical benefit on disease that has spread to the brain, bone, liver, lungs, or other internal organs.12,14

According to Karen Midthun, MD, Director of the FDA’s Center for Biologics Evaluation and Research, “Melanoma is a serious disease that can advance and spread to other parts of the body, where it becomes difficult to treat. This approval provides patients and health care providers with a novel treatment for melanoma.”12

The exact mechanism of action of T-VEC is unknown.14 This agent is a genetically modified herpes simplex virus (HSV) type 1 that replicates within tumors and produces GM-CSF, an immune stimulatory protein. T-VEC causes lysis of tumors, followed by the release of tumor-derived antigens. Together with virally derived GM-CSF, T-VEC may promote an antitumor immune response.14

T-VEC is administered by direct injection into cutaneous, subcutaneous, and/or nodal melanoma lesions that are visible, palpable, or detectable by ultrasound guidance.14 T-VEC is provided in single-use vials of 1 mL each in 2 different dose strengths14:

During the initial treatment, the largest lesions should be injected first, followed by smaller lesions; new lesions and large lesions should be prioritized 3 weeks after the initial treatment. Every 2 weeks thereafter, T-VEC should be administered at a dose of 108 (100 million) PFU per mL to new lesions and large lesions. During each treatment with T-VEC, the total injection volume should not exceed 4 mL for all injected lesions combined. As such, at each treatment visit and during the full course of treatment, injection of all lesions with T-VEC may not be possible.14

T-VEC is stored frozen (–90°C to –70°C) and then thawed at room temperature before dosing.14 Approximately 30 minutes is required for the drug to liquefy.14,15

The approval of T-VEC in metastatic melanoma was based on the results of OPTiM, a phase 3, multicenter, open-label, randomized clinical trial that enrolled 436 patients with unresectable stage IIIB, IIIC, and IV melanoma.12-14 T-VEC was injected into cutaneous, subcutaneous, or nodal melanoma lesions only. Previous systemic treatment for melanoma was allowed. Patients with active cerebral metastases, bony metastases, extensive visceral disease, primary ocular or mucosal melanoma, evidence of immunosuppression, or receiving treatment with a systemic antiherpetic agent were excluded from the study.14

The majority (98%) of patients enrolled in the OPTiM trial were white and 70% had an ECOG performance status of 0 at baseline.14 Overall, 70% of patients had stage IV disease (27% M1a; 21% M1b; 22% M1c), and 30% had stage III disease.14 In addition, 53% of patients had received therapy for melanoma either in addition to or as an alternative to surgery, adjuvant therapy, or radiation.14 More than half (58%) of the patients were seropositive for HSV-1 wild-type at baseline.14

The patients received treatment for at least 6 months or until no injectable lesions were present. After 6 months of treatment, patients continued therapy until clinically relevant disease progression up to 12 months. All patients were followed for at least 36 months.14

The major efficacy measure was the durable response rate, with tumor responses determined according to the World Health Organization response criteria that were modified to allow patients who developed new lesions or whose disease progressed to continue treatment and to be evaluated later for tumor response. 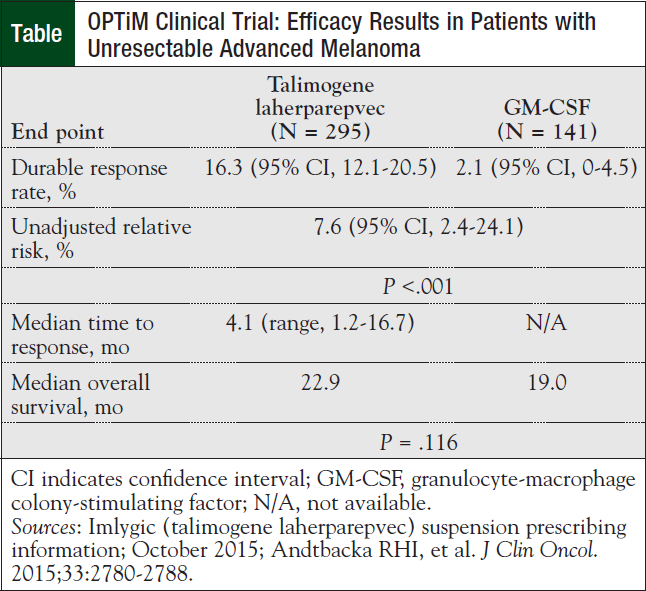 A total of 292 patients with unresectable advanced-stage melanoma received at least 1 dose of T-VEC in the OPTiM study.14 In this cohort, the median duration of exposure to T-VEC was 5.3 months.14 Overall, 26 patients were exposed to T-VEC for at least 1 year.14

The majority of adverse reactions associated with T-VEC were mild or moderate and typically resolved within 72 hours. The most common grade ≥3 adverse reaction was cellulitis.14

Because T-VEC is a live, attenuated HSV, it can cause life-threatening disseminated herpetic infection in patients who are immunocompromised.14 T-VEC is contraindicated in immunocompromised patients, as well as in pregnant women.14

Studies regarding drug interactions have not been conducted with T-VEC.14 Because T-VEC is sensitive to acyclovir, the use of acyclovir or other antiherpetic viral agents may interfere with T-VEC’s effectiveness.14

Accidental exposure. Exposure to T-VEC can lead to the transmission of T-VEC and herpetic infection.14 Accidental needle sticks and splashback of T-VEC to the eyes have been reported by healthcare providers during T-VEC preparation and administration.14 Consequently, the following are recommended14:

In the event of accidental exposure to T-VEC, clean the affected area thoroughly.14 If the symptoms of herpetic infection develop, the patient must receive appropriate treatment.14

Injection-site complications. Necrosis or tissue ulceration can occur at the site of T-VEC injection.14 Cellulitis, systemic bacterial infection, and impaired healing have been reported in clinical studies. T-VEC can affect healing in patients with underlying risk factors. The risks and benefits of T-VEC should be considered before continuing treatment if persistent infection or delayed healing at the injection site occurs.14

Pregnancy. There are no studies of T-VEC in pregnant women. However, if a pregnant woman is infected with wild-type HSV-1, the virus can cross the placental barrier, and can be transmitted to the baby during birth. If a patient becomes pregnant while taking T-VEC, she should be apprised of the potential hazard to the fetus and to the neonate.14

Lactation. There is no information regarding the presence of T-VEC in human milk, or its effects on the breast-fed infant or on milk production. Patients should discontinue nursing or discontinue T-VEC while breast-feeding.14

Females and males of reproductive potential. There are no data regarding the effect of T-VEC on fertility.14

Pediatric use. The safety and effectiveness of T-VEC have not been established in children.14

Geriatric use. No differences in the safety or efficacy were observed between patients aged ≥65 years and younger patients who received T-VEC.4

Breakthroughs in immunotherapy have changed the management of advanced melanoma. T-VEC is the first oncolytic virus therapy that has received FDA approval for patients with unresectable melanoma lesions. Compared with GM-CSF, intralesional injections of T-VEC significantly improved the rate of durable responses to treatment. T-VEC has not been shown to significantly improve overall survival or to affect visceral metastases.

The clinical activity of T-VEC, alone and in combination with other immuno-oncology agents, such as nivolumab or pembrolizumab, is being evaluated in patients with melanoma, as well as in other malignancies, including head and neck cancer and hepatocellular carcinoma.16