Imbruvica (Ibrutinib): First Drug Approved for the Treatment of Patients with Waldenström’s Macroglobulinemia

As malignant B-cells grow in the bone marrow, they crowd out healthy erythrocytes, white cells, and platelets, and disrupt normal hematopoiesis.2 As such, fatigue and bruising are common among patients with WM.2 WM most often involves the blood and bone marrow at the time of diagnosis, but can metastasize to the lymph nodes, liver, or spleen, as well as to the gastrointestinal system and the lungs.2

WM is a rare condition, representing approximately 2% of all hematologic malignancies.2 In the United States, 6 new cases per 1 million individuals are diagnosed annually, translating to approximately 1500 patients annually.2 Older white men are at a relatively increased risk for WM.2

WM is staged based on the patient’s risk status using the WM International Prognostic Scoring System.3 Overall, 5 adverse covariates have been identified, including3:

Similar to other indolent lymphomas, active surveillance or watchful waiting is an appropriate approach for patients with WM who are asymptomatic.2 Initiation of treatment is recommended when patients report ≥1 of the symptoms of WM, including recurrent fever; night sweats; fatigue associated with anemia (hemoglobin ≤10 g/dL); thrombocytopenia (<100 g/L), or weight loss; severe peripheral neuropathy resulting from the abnormal IgM protein; impaired kidney function as a result of the abnormal IgM protein; and systemic amyloidosis with organ damage related to the IgM protein.2

Therapeutic options for patients with WM who warrant treatment include chemotherapy agents (ie, bendamustine); purine nucleoside analogs (ie, fludarabine); monoclonal antibodies (ie, rituximab, alemtuzumab); corticosteroids; immunomodulatory agents (ie, thalidomide); and proteasome inhibitors (ie, bortezomib).2 However, none of these therapies has been approved by the US Food and Drug Administration (FDA) for WM.2 Additional treatment with ≥1 of these agents, or with high-dose chemotherapy followed by autologous stem-cell transplantation can be considered upon disease progression or disease relapse.2,5

Recently, significant progress has been made in the identification of genetic abnormalities associated with WM.3,6,7 Gene sequencing has revealed a prevalent mutation in the MYD88 gene, as well as multiple mutations in the CXCR4 gene in patients with WM.3,6,7 A somatic mutation known as MYD88L265P is known to fuel cancer-cell growth by activating the nuclear factor κB through 2 distinct pathways—(1) Bruton’s tyrosine kinase and (2) interleukin-1 receptor–associated kinases, IRAK1 and IRAK4.8 It is expected that the discovery of WM-specific mutations will facilitate the evaluation of agents that target these mutations and/or their downstream effects and improve clinical outcomes.3,6-8

The FDA’s approval of ibrutinib for WM was based on a phase 2 multicenter study of 63 patients with previously treated WM.3,9,10 During the initial data analysis, 62% of patients with relapsed WM had responded to ibrutinib therapy.10

And on March 4, 2016, the FDA approved a new indication for ibrutinib as first-line treatment of patients with CLL, regardless of any previous treatment.11 This is the first FDA approval for a chemotherapy-free option as first-line treatment for patients with CLL. The approval was based on updated data showing 84% reduction in disease progression or death with ibrutinib compared with chlorambucil.11

Ibrutinib is the first FDA-approved drug designed to target Bruton’s tyrosine kinase, a protein necessary for the growth and the survival of B-cells.12

In patients with WM, the recommended dose and schedule for ibrutinib is 420 mg (three 140-mg capsules) taken orally once daily.10

Ibrutinib should be administered at the same time each day, and should be swallowed whole with water. The oral capsules should not be opened, broken, or chewed.10 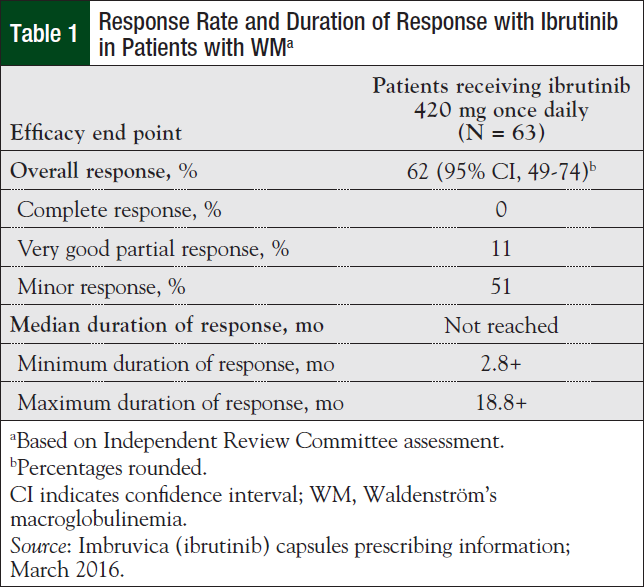 A subsequent analysis of the phase 2 clinical trial of ibrutinib in WM included a long-term follow-up of the 63 patients with WM: after treatment with ibrutinib for a median duration of 19.1 months (range, 0.5-29.7 months), the overall response rate for all patients was 91%.3

The researchers noted that the presence of specific MYD88 and CXCR4 mutations affected the responses to ibrutinib; an overall response rate of 100% was observed in the genomic subgroup characterized as MYD88L265P CXCR4wild-type. Improvements in the overall response rate were reported in all genomic subgroups after more than 6 cycles of ibrutinib therapy, with more pronounced improvements observed in patients in the MYD88L265P CXCR4WHIM subgroup.3 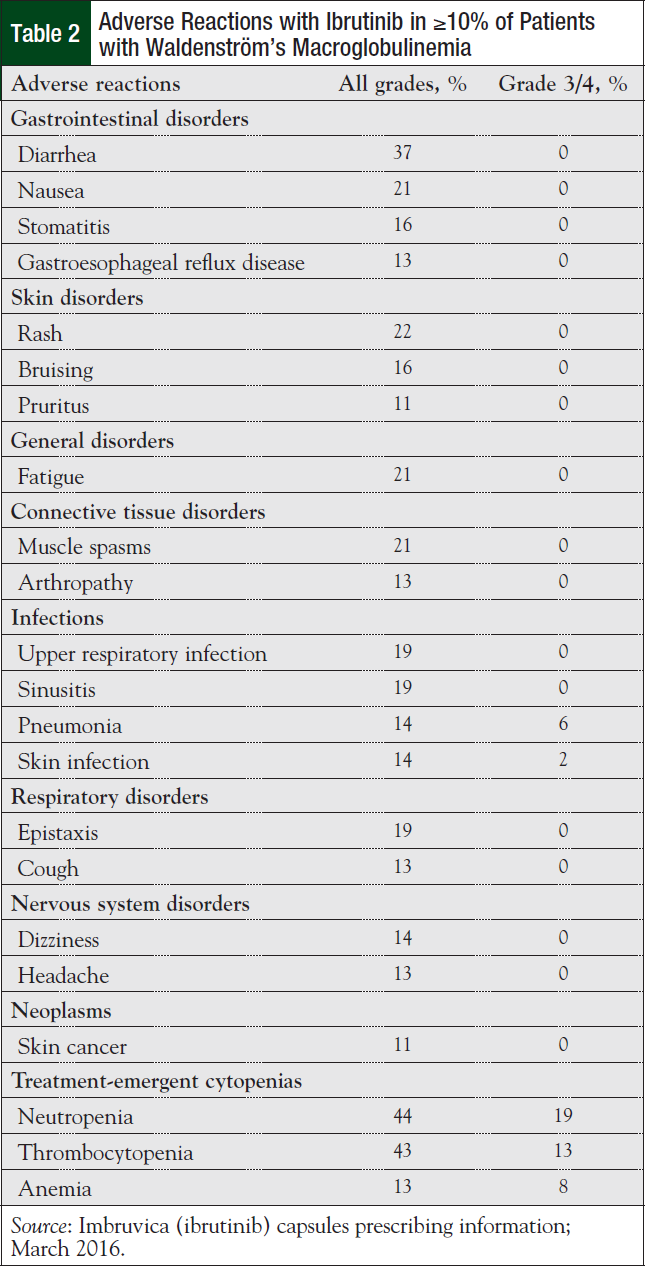 Hypersensitivity reactions, including anaphylactic shock (fatal), urticaria, and angioedema, have been reported after the FDA approval of ibrutinib for WM. It is not known whether these reactions were drug-related.10

Ibrutinib has no contraindications.10

Because ibrutinib is metabolized primarily by the cytochrome (CY) P450 enzyme 3A, it should not be coadministered with strong or moderate CYP3A inhibitors or with strong CYP3A inducers.10

Hemorrhage. Patients taking ibrutinib have experienced fatal bleeding events. Grade ≥3 bleeding, including subdural hematoma, gastrointestinal bleeding, hematuria, and postprocedural hemorrhage, have been reported in up to 6% of patients taking ibrutinib.10 Bruising, petechiae, and other bleeding events (any grade) have been noted in approximately 50% of patients using ibrutinib.10 Ibrutinib may increase the bleeding risk in patients who require antiplatelet or anticoagulant therapies. Ibrutinib may need to be stopped for 3 to 7 days before and after surgery, depending on the risk for bleeding.10

Infections. Fatal and nonfatal infections, including progressive multifocal leukoencephalopathy, have occurred with ibrutinib. Monitor ibrutinib recipients for fever and infections.10

Atrial fibrillation. Atrial fibrillation (AF) and atrial flutter have occurred in 6% to 9% of patients taking ibrutinib, particularly those with cardiac risk factors, acute infections, and a history of AF. Patients should be periodically monitored for AF. If arrhythmic symptoms or new-onset dyspnea are observed, an electrocardiogram should be performed. If AF persists, the risks and benefits of ibrutinib dose modification or discontinuation should be considered.10

Embryo-fetal toxicity. Based on animal studies, ibru­tinib can cause fetal harm when used in pregnancy.10

Pregnant women. Based on animal data, ibrutinib can cause fetal harm when administered to a pregnant woman; women should be advised to avoid becoming pregnant while taking ibrutinib.10

Renal impairment. Ibrutinib exposure is not affected in patients whose creatinine clearance exceeds 25 mL/min. Patients with severe renal impairment or patients on dialysis have not been studied.10

Plasmapheresis. Patients with WM may require plasmapheresis before and during treatment with ibrutinib to manage hyperviscosity. No modification of ibrutinib dosing is required.10

Ibrutinib, a first-in-class inhibitor of Bruton’s tyrosine kinase, is the first medication approved in the United States for the treatment of patients with WM, an indolent lymphoma characterized by genetic mutations that alter cancer-cell growth through Bruton’s tyrosine kinase and other signaling pathways. A phase 2 clinical trial that documented a 62% overall response rate at the initial data analysis, and a 91% overall response rate after a longer follow-up period. In addition, this once-daily oral agent has demonstrated acceptable toxicity in patients with WM, with cytopenias and diarrhea reported as the most common adverse reactions. Because ibrutinib has a favorable therapeutic index, its use alone and in combination with other agents for the treatment of patients with WM and other hematologic malignancies is currently being explored. Examples include a randomized, placebo-controlled study of ibrutinib combined with rituximab in patients with WM; the combination of ibrutinib with obinutuzumab in patients with previously untreated CLL; and the combination of ibrutinib with bendamustine and rituximab in patients with newly diagnosed mantle-cell lymphoma.16